The Land Before Time

The earth did not simply split open one day to deliver scanlation to the masses of Japanese-illiterate, manga-starved fans. Scanlation arose gradually as more people gained access to the Internet and to better graphic editing and file distribution software over the years. One fact, however, cannot be denied: the birth and early growth of scanlation is closely linked to fansubbing (which is essentially the same as scanlation, but involves anime rather than manga).

Fansubbing, without going into the gory details of what it is and its origin, started in the late 1970s with VHS tapes. Fast forward to the late 1990s, when Internet access was becoming faster and more readily available, and some people began translating manga scripts. As with fansubs, people soon formed groups and began editing those translated scripts onto manga scans to enhance the reading experience. Thus, the very first scanlated manga was born.

While there is no clear-cut record of when scanlations first appeared, there have been many individuals and small groups of people producing fanscans (the term used before "scanlation" became popular) on Usenet and around the Internet since before 1999. In fact, the first scanlations weren't distributed on the Internet at all. Sometimes scanlations would be distributed via email or on CDs sent through the mail or passed around anime clubs, much like older VHS fansubs. There is a Ranma ½ translation newsgroup that dates back to as early as 1989 (that server was actually one of the first servers that stored pictures of anime series online and it provided manga translations as well as information on many series).

Many of these projects started off simply as translated scripts of popular Japanese manga. The earliest recorded translation was probably a fan translation of Tezuka's Phoenix by the four-man team "Dadakai" in 1977. One of the four members of Dadakai was Frederick Schodt, who would later go on to become a well-respected manga scholar in the U.S. The group's translation was later incorporated into Viz's official release of Phoenix. By 1992, many individual translation projects could be found on Usenet on newsgroups like rec.arts.manga and alt.manga as well as on various FTP servers. Popular series included Kimagure Orange Road and Ranma ½. 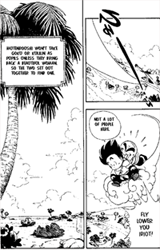 Some projects were started for the purpose of obtaining manga otherwise unavailable outside of Japan. When Viz first began releasing Rumiko Takahashi's Ranma ½ in the U.S. in 1993, each chapter was released very slowly. In response, Jason Satoru Doyama started a translation project called The Ranma ½ Project on June 3, 1996 and hosted translated scripts of Ranma ½ that would have otherwise taken many years to reach U.S. shores; the project later went down but was succeeded by The New Ranma Project. Jason Doyama, together with Smurfbon (who operated the websites), ran two other projects between 1996 and 1997: The Dragon Ball Project and The KOR Project. The Dragon Ball Project and The Kimagure Orange Road Project were probably some of the earliest scanlation projects and were little more than translated texts laid on top of images using MS Paint. Both projects were later shut down after receiving warnings from Viz. Another Ranma ½ translation project, this time by Studio Robb, also began in 1996. Studio Robb later went on to translate and scanlate other series as well and operated until 2004, when Robb went to work in the manga industry.

Many Dragon Ball translations and fanscan projects also existed. Aside from Doyama's Dragon Ball Project, there were Joseph Teed and Peter Michaud's Translated DBZ Manga page, CDC's Dragonball Archive, and The Daily Dragon Ball Chapters project (DDBC). DDBC was a very popular Dragon Ball translation site founded in 1997 by E.P.; the site later became a large source and repository of scanned and translated Dragon Ball manga. Of course at the time, no one called what they were doing scanlation. Some called it "fanscanning." A few even called it "fan-lettering." The term "scanlation" was not coined until sometime around 2000.

Other projects that have existed since 1996 included translations of CLAMP manga like X and Magic Knight Rayearth from the CLAMP Mailing List (CML) Manga Translation Team. Translations of shoujo manga like Fushigi Yuugi were available on sites like Tasuki no Miko's Fushigi Yuugi page since 1999. Other popular series like Sailor Moon, Slayers, and Yu Yu Hakusho also had their own dedicated translations online. Guyver - Scanned Chapters was a project that started sometime before 1998 and stayed around until 2001. There was also the The Nameless Manga Translation Site by Space Coyote.

A notable translation website called Wot-Club's Inuyasha - Sengoku o-Togi Zoushi - provided weekly translations of Inuyasha since it started in 1997; the site went on to operate for almost ten years. Another notable project was Spamdini's Tales of the Swirly-Eyed Samurai. Tales of the Swirly-Eyed Samurai was originally hosted on GeoCities and was one of the few sites online in 2000 to serve scanlated chapters of the popular samurai epic Rurouni Kenshin. Around 1999, there was also a site called The Ultimate Manga Download Archive that hosted over 75MB of manga (which was a lot at the time).

Some of these translators translated manga to practice their Japanese, while others translated simply for their love of manga. As years went by, some translators joined scanlation groups, but most disappeared as they moved on to other things. Links to many translation sites can be found here, though most of the sites are no longer available.

Between the period of 1999 and 2001, individual fanscan efforts became more organized and structured, and many people worked together to form groups dedicated to scanning, translating, and editing Japanese manga. This was the first generation of scanlation groups; they are the early pioneers, and experimented with new scanlation practices that are still used today.