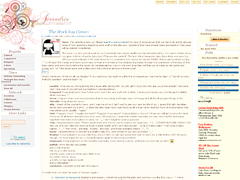 Aerandria is a shoujo scanlation group formed in June of 2007 that produces high-quality scanlation of shoujo, smut, and some shounen and doujin works, and is currently Aerandria is one of the biggest shoujo scanlators in the scene. Aerandria was founded by Lacaille and Tii-chan after a merger between Winglica and Scrumptious Scanlations.

According to its About page:

For those of you who have no clue who we are, Aerandria is a manga scanlation group. Actually, to be more specific, we're TWO groups: Winglica and Scrumptious Scanlations. Upon mutual agreement, we've decided to merge our groups to be bigger and better than ever!

Aerandria experienced a huge setback at the end of 2007, when Lacaille's co-admin Tii-chan left the group. Since then, Lacaille has been leading the group as it grew exponentially in size and popularity within just a few years. In 2009, while older shoujo groups like ShoujoMagic and MangaArt have shrunk, Aerandria, with its energetic and young staff body, became a solid scanlation group with a vibrant community where fangirls gather to talk about their favorite manga, among other things. As time went on, Aerandria began to attract older scanlators from groups like ShoujoMagic, further boosting the group's effectiveness and reputation.

Rapid growth also has its side effects. Throughout the years Aerandria's website crashed several times due to excessive CPU usage. In late 2009, shortly after completing its most popular project Midnight Secretary, Aerandria's website went down due to excessive downloads. Despite various setbacks, Aerandria is slowly turning into a powerhouse scanlation group, much like ShoujoMagic in its early days. By mid 2009, despite having only been in the scene for two years, Aerandria has a reservoir of over 20 active projects, over 90 completed series and oneshots, and over 40 planned projects, a portfolio many older groups can only dream of.

While Aerandria continued to output chapter after chapters of work between 2010 to 2013, but as of 2014, the group's output pace had slowed down dramatically.