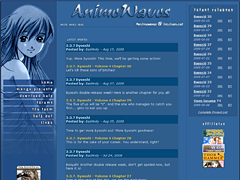 AnimeWaves is a popular shounen scanlation group founded by BadAndy sometime in 2002. The group was originally a forum-based team that produced both manga scanlation as well as anime fansub—hence the name AnimeWaves. Throughout 2003, AnimeWaves gradually shifted its focus to manga scanlation. By 2004, the group had for all intent and purposes withdrew from the fansub scene and became a full-time scanlation group.

Although there were a few attempts at shoujo manga, all of AnimeWaves's projects are shounen projects that usually centers on romance or the likes. In the beginning, AnimeWaves primarily worked from Chinese manga or scanlations, but as the team grew and gained more members, it began to scanlate straight from Japanese raws. Some of AnimeWaves's more popular projects include Pastel, Gacha Gacha, Open Sesame, and last but not least, Ichigo 100%, a manga that was also being scanlated by Yanime at the time.

The rivalry between AnimeWaves and Yanime over Ichigo 100% scanlation resulted in quite a few interesting stories and incidents. Unlike most other project-oriented competitions, both groups were high-quality groups with great staff members and resource, and the end result were almost identical (although at first AnimeWaves did translate Ichigo 100% from Chinese scripts while Yanime translated from the original Japanese scripts). Fueled and exaggerated by fanboys and rumor mongers, the rivalry became a classic example of inter-group competitions of the mid 2000s.

AnimeWaves has also had a lot of trouble throughout the years with hosting. Because the group hosted its releases on the site, AnimeWaves often found itself running out of bandwidth, leading to a series of donation drives to keep the site's server alive. Over the years, the site has also survived a couple hostile takeover attempts and hiatus from BadAndy (without whom the group could not function properly).

AnimeWaves became very popular among younger manga fans. In 2004, the group held an Anime Waves Manga Girl Tournament 2004 that lasted for half a year. In mid 2005, BadAndy announced that AnimeWaves has reached 10 million hits:

AnimeWaves finally have hit the 10 millionth hit mark! 10 million...such a huge number, back when I was little and started this site, I was happy to see more than 100 people...those were the sweet innocent days~ Now, with around 10000 unique visitors visiting AnimeWaves daily, it has really changed and went a long way.

Back then, when I just started the site, it was run on a free webhosting. Now, we are run on a dedicated server! As with your continued support for our manga, I also hope that you will continue to support our server, so that we can continue to offer our vast HTTP archives and speedy IRC bots (a great service that I am pretty sure is one of the best in the manga community, thanks to all the support by wonderful fans like you!) Keep the support going~

By 2007, with most of its older project either completed or licensed, and many of its staff members, especially its founder and leader BadAndy, moving on with life, AnimeWaves began to slow down as a new generation of scanlators began to gain momentum in the scene. Although AnimeWaves is still alive and scanlating in 2009, it is no longer the powerhouse group it was in 2005. AnimeWaves' last update came in June of 2013, and the group's website closed down later that year.