While the U.S. scanlation scene is one of the biggest and most organized, scanlation communities exist all around the world. Readers in European countries such as France, Italy, and Germany were enjoying manga long before it grew popular in the United States. Consequently, there exist many many European scanlation groups scanlate manga into their respective languages. 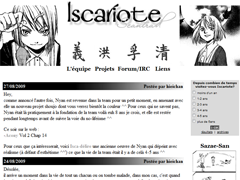 One of the biggest scanlation communities in Europe is found in France. Due to the sheer number of scanlation teams, the French release tracking site DailyManga was created to keep up with new releases. Many French scanlators' websites can be found on DailyManga's group listing page. One of the most well-known French scanlation groups is Iscariote. Founded in 2002, Iscariote scanlates manga of all genres and has maintained an extremely consistent release schedule over the years, making it one of the biggest and most productive French scanlation groups ever. But foreign scanlations are not limited to France. Other European scanlators translate manga into German, Spanish, Portuguese, Italian, Russian, and many other languages. By 2007 and 2008, English-language communities like MangaHelpers had begun to attract foreign scanlators as well.

If any scanlation scene could rival the size and complexity of the U.S. community, it would no doubt be that of the Chinese. China is infamous for piracy and bootlegged products, and manga is no exception. Since the Chinese government tends to ignore manga download and reading sites, finding free manga is relatively easy in China; almost every manga forum and fan community has a section that leads in one way or another to manga downloads. In many Baidu (the Chinese counterpart to Google) manga communities, threads on manga downloading and reading resources are stickied at the top of the forum.

A big difference between China and the U.S. is that a large number of manga have already been translated and published in manga markets in mainland China, Taiwan, and Hong Kong. As a result, a large part of Chinese scanlation involves manga-scanning. Many groups and individual efforts compete to provide high-quality Chinese manga scans. In contrast to their U.S. counterparts, many Chinese teams like to watermark their work. Some only put their group's logo on the first few pages, but many groups watermark their logo or a message onto every single page of their releases. Of course, most readers simply ignore the watermarks.

Another big difference between Chinese and U.S. groups is that Chinese groups almost never use IRC. Some groups meet in private QQ (a popular Chinese IM program) channels, but most communicate through online forums (usually powered by Discuz! or PHPWind). Although some groups have blogs, most don't have websites of their own.

Many Chinese groups are based around forum communities. Unlike U.S. groups, some Chinese groups like to make their work available exclusively to regular members of their forum. To become a regular member, one must first earn points by contributing positively to forum discussions. Some groups even go so far as to limit forum registration to only a few short periods a year. It is not unusual for Chinese fansub groups to have a scanlation division. Although it is at times very hard to get hold of high-quality manga online, once someone uploads a good manga, the file immediately spreads around the Internet and is in no time available on every Chinese download site. Due to China's recent focus on battling piracy, many communities have closed down since late 2008, but others simply went deeper underground.

Like in the U.S. community, there are large online reading sites in the Chinese scene as well, but most of the time they are part of an anime/manga portal that is so big and ad-ridden that the experience is nothing like those of sites like OneManga. Although BitTorrent isn't as big in China as it is in the U.S., many BitTorrent sites dedicated to ACG (Anime, Comics, and Games), much like TokyoTosho, do exist. The most popular distribution method in China is direct download. A group first uploads the manga to a direct download site (such as JSharer, NamiPan, and YouSendIt), and then spreads the link in forums and bulletin boards. Peer-to-peer software like eMule is also widely used. At one point, a free image hosting service called 163 Album also became a popular way to distribute manga, but the host implemented stricter rules after a few years which effectively killed the manga sharing community spawned around its service.

Many individual scanning efforts existed as well. One particularly well known scanner is NGA's FallMonkey (堕落的猴子). NGA, which stands for National Geography of Azeroth, is one of the biggest and most popular World of Warcraft communities in China. FallMonkey was a well-respected moderator for the "Might of The Light" board on NGA. While at NGA, FallMonkey wrote many insightful manga threads and worked on various scanlation-related projects.

During the launch of WoW's Wrath of the Lich King expansion, a group of people placed a bet on when Chinese players would be able to access the new "world" introduced by the expansion. FallMonkey participated in the bet, and unfortunately lost. As a result, FallMonkey's reputation points, which gave him many special privileges like access to special sections on the forums, were reduced from over 300 to zero, rendering his forum ID useless. Since then, FallMonkey has been seen on various other forums offering large collections of Chinese manga scans, adding new scans to his collection at an astonishing rate (sometimes over thirty manga a month). Because of his speed and high-quality scans, many named FallMonkey the number one scanner in mainland China. 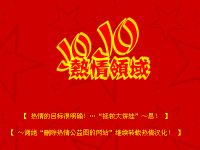 Another well-known Chinese scanlation group is JoJoHot (JOJO热情汉化组), which was formed by a person calling himself Jojo as a fan forum where people could download their favorite manga. Jojohot.com soon evolved into a scanlation group that scanlated shounen manga serialized in magazines like Weekly Shounen Jump and Monthly Shounen Jump. JoJoHot is essentially the Chinese counterpart to Toriyama's World, except JoJoHot is still quite alive, whereas Toriyama's World has been defunct since 2007. JoJoHot is also one of the few Chinese groups known outside of China. Due to the speed of its releases, its work has occasionally been used by English speed scanlators as raws (most of the time without permission, much to JoJoHot's dismay). There is even a JOJOHOT LiveJournal community set up to help foreigners understand the group.

Although scanners immediately scan and upload manga once it is released in either Hong Kong or Taiwan, there are still many scanlation groups that work from Japanese magazine scans. These groups, like JoJoHot, are typically speed scanlators. One notable speedscan group is Kunlun (昆仑汉化), a large shounen-oriented group that is something of a rival to JoJoHot. Other notable groups include Yubisaki Milk Tea Support Group (指尖奶茶应援会, which scanned Yubisaki Milk Tea, Hayate the Combat Butler, etc.) and Man Show (漫狩汉化, which worked on Fullmetal Panic Sigma, Princess Resurraction, etc.). Shoujo groups like BillWang also exist. Most of these groups work from magazine scans and can be categorized as speed scanlators. There are, however, high-quality groups working in China. Cloudc (云中漫步) is one of the few groups that release high-quality scanlation by working from tankoubon releases. Some of Cloudc's works include Mushishi, School Rumble, and many American super hero comics.

For a more in-depth analysis of some of the more famous Chinese scanners and manga distributors, please refer to a Chinese article titled "中国的扫漫组和扫漫者" (written in Chinese).