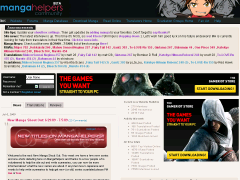 MangaHelpers is a community-oriented forum-based website launched by njt at the end of 2005. Since then it has become one of the most successful scanlation listing, download and community sites.

In 2005, NarutoFan was one of the largest English Naruto communities on the Internet. Every week, on the "raw day" (the day when Naruto raw from the latest issue of Shounen Jump is released), the forums would often slow to a crawl or even go down due to the large volume of traffic it receives.

njt, wanting to create a similar site to help people get their fix of the latest raw, had been working on a site named MangaHelpers and, in November 2005, decided to unveil the new site. From there on MangaHelpers became known to the masses as the place to go to for the latest manga and later for international translations as well.

When it was first launched, MangaHelpers ran as a forum site powered by Simple Machine Forum with MKPortal (a Portal/Content Management System, or CMS, that integrates with SMF). The site functioned almost as an extension to fan communities like NarutoFan's forum. People went to MangaHelpers for the latest raws, translations and scanlation of popular Shounen Jump manga like Naruto, Bleach and One Piece. Each section of the site would have its own sub-forum, and different chapters and releases had their own thread. The advantage of a forum-based site was that its users could easily comment on their favorite series and releases. As time went on, MangaHelpers grew in size and began to list not just popular shounen manga, but also manga from other genres. Since then MangaHelpers attracted even more groups and users to its community.

While this facelift does not bring about any immediate added features other than a real news system, a manga cloud to show what's popular and a section showing off you, our precious contributors at MangaHelpers. What has been heavily changed could be what you call "under the hood" as far as our website goes (not the forums) has been taken out, modified, rebuilt and customized specifically to our needs. You may remember times when the website was slow due to features on the main page, or even times where the website was down due to too high traffic.

- Well, gone are those days indeed.

MangaHelpers.com is in a transition - a transition aiming to become the number one manga fansite community on the net. Yes, it is a steep goal but while we feel confident that you, our loyal fans and members, already make us the best Manga community, we can reach higher and improve on ourselves for everyone's benefit.

In Novemver 2008, MangaHelpers celebrated its 3rd anniversary by releasing a MangaHelpers Yearbook, as well as an announcement about the future of the site. Later that month, a beta version of the new MangaHelpers v2.3 was made public.

With its unique service, MangaHelpers also played an part in the speedscan movement by providing easy access to manga raws, as this paper notes:

New scanning technologies and faster internet make RAWs available sooner and with better quality. Mangahelpers and Ritual Scan Forge (RSF) have given easy, free, and uncomplicated access to many RAWs, which in the past have been secret in monopolizing scanlation projects. Mangahelpers also plays an important role in the actual translation process, as it provides an independent source for translations for certain series. Most series, where the translations are not reserved and hence available for public use, have more than one speed scanlation group working on them, and are rarely joined by a quality scanlation group.

MangaHelpers continued to add new features and improved its website. By 2009, the site was one of the most popular stop for anything scanlation-related. MangaHelpers not only offered raws, translations and scanlations, but also provide a home base for individuals and small groups (especially speed groups) to host their manga and release projects. Also, MangaHelpers began to expend its operations outside of the boundaries of English scanlation, becoming a truly international scanlation website where translations and scanlations of foreign languages were also readily available (although English scanlation still dominates the site). Last but not least, MangaHelpers has become one of the largest scanlation community sites online, a major hub in a flourishing community where raw providers, translators, editors, fans and others came together and talked about scanlation and manga in general.

In the beginning of 2009, njt posted the following announcement on MangaHelpers's future:

It's been a long year. 2008 has marked some siginificant changes for MangaHelpers as the website is growing up - both age wise, and visitor wise. We have brought you something different than just a release tracker, but something more than just downloads. Ahead of us, we have 2009 which will set the bar for where we want to go with the website as a community.

Going forward, things like deeper levels of customisation in "My AFF", possible additions of Wiki system/Blogs/My MangaHelpers and a custom Doujin publishing platform are some of the things we are looking at implementing. Namely, services that we just feel are missing to complete our repertoire of current generation website features. The real exciting parts are the custom ideas we have for expanding on the vast world of manga and sense of community we already have here.

2009 has many surprises in store for everyone and we hope to continue delivering a quality product to a fantastic community. Keep your eyes and ears open, keep coming back and keep expressing your gratitude to those groups and individuals who weekly bring you the latest and greatest from the Manga World.

In Septmber of 2009, MangaHelpers removed all Kodansha manga from its archive after receiving a C&D letter from Kodansha. In that same month, an unfinished draft of a business proposal to Viz was leaked online, causing a huge uproar in the scanlation community, as many fans felt betrayed by MangaHelpers's move to reach out to publishers. According to this report:

As you may have already heard, we have received a number of reports of some sort of business proposition between Viz and Mangahelpers. At this point, it appears that the information was leaked in draft form, and hasn't actually been proposed directly to Viz.

The news looks to have been first reported via a negative analysis by the scanlation group FoOlRulez. At this time, this seems to be the most in-depth information source regarding the business plan.

The following are quick links to the proposed email and business plan, and the official response from mangahelpers themselves.

MangaHelpers later released a FAQ to clear up the misunderstanding, but some damage had already been done due to the unexpected and overwhelming response from angry fans.