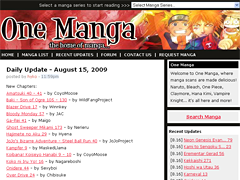 OneManga is a large, if not the largest, online manga reading sites. Although not the first of its kind, OneManga managed became the top online reading site thanks to its simple navigation, fast updates, and large reservoir of manga series.

OneManga was launched on December 19, of 2006 by Zabi, the opening announcement is as follows:

One Manga is born!

Well, after lots of hard work, OM is finally ready to see the world.

So what is OM? OM = good scans + instant online viewing = best thing since sliced bread?! Our goal is to provide a place for you, the fans, to read the latest updates of your favorite mangas online, instantly, and without hassle.

Feel free to let us know what you would like to see here! And if you like what you see, remember to help spread the OM love... ^^

OneManga was at first created as a place to host the latest scanlation releases at a good speed for online viewing, since at the time many other online reading sites, such as Manga Volume, were a bit slow when it came to updates. Another reason for OneManga's creation, much like StopTazmo, was to counter pay sites like NarutoFan by providing scanlation for free to people who otherwise cannot download the manga. At first, manga added to OneManga were all of the latest available chapters and raws (very rarely, though, and are replaced by scanlated versions when they come out). Over time, as more series were added and visitors to the site grew, OneManga began adding older chapters of its hosted series. According to Hyko: "Over time we started to add more series and the visitors to the site grew and many asked if we could get some of the past chapters up so they could read the series fully. Also thinking that it would be much better to get people introduced and into certain series if we had the at least the first few volumes up, we agreed to start adding back the older chapters."

By 2008, the size of OneManga's manga archive had increased significantly, and new scanlation chapters were added daily; OneManga was already one of the biggest online reading sites in the scene. Despite its growth, OneManga did encounter various problems, including hosting problems, malicious ads, and last but not least, run-ins with publishers, which resulted in the removal of all Tokyopop series from the site in late 2007. Over the years, OneManga has also added various new features and services, including an OneManga Manga Store and an attempt at creating its own in-house scanlation team.

Complaints against OneManga has also been mounting, especially from older groups, which argues that online reading sites like OneManga is taking readers away from a scanlation group's own website and IRC channel, effectively cutting the groups off from potential new staff members (at a time when older staff members are moving on with their lives) and valuable feedbacks. Others criticized OneManga for its policies of listing speedscans, which in turn promotes low-quality scanlation. The point is best summarized by cnet128 during his interview with MangaHelpers in early 2009:

[...] SleepyFans and OneManga have been pet hates of mine for a long while, for variants on the same reason. SleepyFans because they have a tendency to release before anyone else even has the RAWs; I'm not too fussed because they're not terrible quality, but it still bugs me. It would bug me a lot more if they did it on a series where I actually care about people using/reading my translations. And OneManga because thanks to their practice of uploading and keeping the first scanlation that comes out of any given chapter, they basically serve as an archive of all the worst scanlations available of a series. It annoys me, is all. With Lord knows how many people going there for their manga fix, you'd think they could at least try to provide quality material.

Despite various setbacks, OneManga experienced immense popularity with a younger generation of scanlators and fans, and has played an important role in providing scanlation to general manga fans who aren't as familiar with the scanlation scene. By 2009, OneManga has grown from a small online reading site that carried mostly Shounen Jump manga to one of the largest and most popular online reading sites covering over 950 series from genres of all kinds.

In May 2010, online news websites reported that OneManga became one of the world's 1,000 most-visited websites, ranking 935 with 4.2 million unique visitors each month. In June 2010, news began circulating that U.S. and Japanese manga publishers are banding together to fight against scanlation. In late July, OneManga announced that it would close its doors at the end of the month. Although in the end OneManga did not completely shutdown, it did remove all of its hosted manga, marking the end of one of the largest and most recognizable online readers.