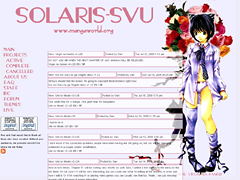 Solaris-SVU is a group founded in late 2002 that scanlates more obscure shounen and seinen manga (often those with an ecchi twist).

In late 2002, Infornography and Zion left MangaArt, one of the few groups dedicated to shoujo manga at the time, to start their own group.

The new group was initially called Solaris Lunae and consisted of two divisions: Solaris and Lunae. Solaris was to be the manga division, and Lunae was intended to deal with music. The Lunae division was soon dropped, and the group came to be known simply as Solaris. Solaris's first two projects, Ai ga Tomaranai and Saishu Heiko Kanojo, were both series dropped by other groups.

According to the Solaris-SVU About Us page:

Solaris (the name and idea at least) was started a few years back by Infornography in the form of small groups and websites some of which still remain today. In the end though, while in #mangaart , I met Zion ( his nick at the time Zion|no|Rave ) and we gradually came up with the idea to make a new manga group which, one day, shall rule over the world. So, me and Zion quit #mangaart (sorry Mimi-chan!) and set off on our own. Somewhere along the lines, John (otherwise known as vbcool) popped into the channel and never left. At first he was supposed to be an editor but then decided that he'd serve his purpose by paying for the website. Ever see the manga/anime Maison Ikkoku? If you have, he's like Mr. Yotsuya. Anyway, our very first project was Sai Kano. With Zion whipping a mass of editors for a few chapters (poor Rio...). Later, the sub-group SVU was formed to focus on some of the less popular manga genres and themes. Eventually though, it was decided to merge the two groups. Another sub-group, Solaris-H was formed in 2005. Solaris-H exists to deal with the scanslation of hentai, and extremely ecchi manga. Solaris-SVU continues to press on, after almost 3 years, and despite the control of the group changing hands 3 times. We thank you all for your support and hope to continue bringing you great, and unique manga well into the future.

A few months after the formation of Solaris, Gari joined the group. Zion eventually created the Solaris Vanguard Unit, or SVU, a subdivision that scanlated less common shounen manga (such as cooking manga and sports manga). Solaris and SVU had their own separate bodies of staff and, for the most part, worked independently of each other.

When the mIRC-X IRC network went down in 2004, Solaris and its SVU subdivision merged to become Solaris-SVU. After the merger, the original founders of Solaris grew less and less active, and Gari eventually became the head of Solaris-SVU. Since then Solaris-SVU has been actively scanlating various manga, and in 2005 picked up several new seinen and ecchi series. Solaris-SVU is one of the few groups created before 2003 that still releases manga on a consistent basis.