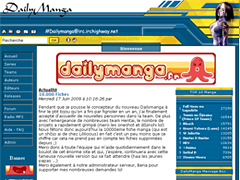 DailyManga was founded by Marcy in September of 2002. 2002 was a time when numerous new groups were formed and all kinds of new scanlations were released every day. Aside from a few older sites like Noated, there were no easy means for people to keep up with what's new, and groups often had a hard time getting words out about their new releases. This is just the English community. In the French community, it was even harder to find new scanlations. Marcy decided to set up and create her own website that would list French scanlations and provide a directory of groups.

During DailyManga's planning, Marcy anticipated that the site would likely be used by English users as well, and so she created an English section for the site. After DailyManga launched, the site was received very well by the community, and the site's popularity skyrocketed thanks to the unique service it provided.

In the beginning, Marcy kept track of new releases by staying in each group's IRC channel. A script was later written to help automate the process. As time went on, Marcy came to rely more on RSS feeds and IRC news bots instead.

Being the first release aggregation site of its kind, DailyManga found itself in the center of the scanlation community. The site became the center stage where drama and rivalries between French scanlation took place. Growing tired of the "conflicts," Marcy implemented several rules that forbid groups to use DailyManga as a stage for competition.

Due to DailyManga's success, once a group's work appeared on the site, the group would immediately receive a huge rush of visitors. DailyManga became one of the few sites where smaller and newer groups could reach out to the community at large and make their works known.

In 2004, Marcy and one of her friend opened a DailyManga online store, which offered Japanese goods suchs as manga, novels, music sheets, and more. The shop also sold various English and French products. In 2006, the DailyManga store teamed up a business partner, who went on to take care of most of the store's business, leaving Marcy free to deal with DailyManga.

While Manga Jouhou did not list any scanlation of licensed series, DailyManga's French interface turned off some English users. The two sites competed head-to-head for many years. Most of the time users visited both sites for a more complete picture of what was going on. By late 2004, while DailyManga and Manga Jouhou were still the center of attention, another release tracking site, MangaUpdates, slowly made its advances in the scene. Like DailyManga, MangaUpdates listed licensed series, and like Manga Jouhou, MangaUpdates was geared toward the English community.

By late 2006, the dynamics between the three sites began to shift; most English fans began to rely on Manga Jouhou and MangaUpdates, partly due to DailyManga's being primarily a French site, and partly due to a few hiatuses on Marcy's part when it came to the English section of DailyManga.

By 2008, Manga Jouhou began losing steam, with MangaUpdates eminently becoming the dominant release watching service. Although DailyManga still reported scanlation releases, the process became increasingly tedious for Marcy (such as keeping track of all the groups that are scanlating Naruto). Marcy began working on a new site for DailyManga that will turn the site into a news site and a manga/doujinshi/magazine reference website, thus leaving the whole release watching business to MangaUpdates. In 2009, Manga Jouhou was largely defunct. Meanwhile, DailyManga was still operational, but progress on the new site moved forward at a somewhat slow pace.