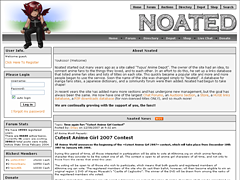 Before there was Manga Jouhou, and before there was DailyManga, there was Noated. Noated is an old anime and manga database site that was popular at a time when databases and directory sites like Anipike and PRISMS dominated the online anime and manga scene. To its users, Noated was a search engine as well as a news source, although not as convenient as modern archive sites like MangaUpdates, it was the only site of its kind prior to 2002.

Noated was started around 1998 by Typus and went by the name Typus' Anime Depot. It was originally created to list the anime-related sites Typus visited that contained downloads and such, and users could rate those sites. According to Noated's own description written by its staff members in later years:

The owner of the site had an idea: connecting anime fans to the things that they loved and each other. In an effort to do this, he created a database that listed anime fan sites. This quickly became popular. Shortly afterwards, the name of the site was changed to simply "Noated", and a database for manga fan sites was added along with a Japanese dictionary and a community forum.

Typus' Anime Depot grew bigger and bigger, until Typus finally decided to turn the site into something more than just a list of sites that people could vote on. Typus decided to give the site a new domain name and a forum. At the time, the forum and the rest of the new site were all scripted by hand. A new name was needed for the re-launch, because Typus couldn't think of anything to name the site, he simply took a part of his own name, Toan, and spelled it backwards, thus Noated.com was born.

Noated became very popular, and was a major stop for many fans and fansub/scanlation staff between 1999 and 2001. Noated's main attractions were its news update, fansub/scanlation directory, and fanbase community.

Noated offered a unique service in the form of an anime directory (AE Search) and a manga directory (Manga Search) that listed names and websites of the fansub/scanlation groups and what titles they worked on, and let a representative from the group to periodically update their listings. Noated was likely the first directory index used for scanlation purposes, letting users search for series' names and see which groups worked on them. The search engine also had a rating system that gave site owners an applet to add to their site with a "rate us on Noated" button. The higher a site's rating and visitor count, the higher the site would be listed in the search and category listings. Although sometimes the information in the database was outdated, Noated was still a gateway to many interesting projects from smaller groups and one-man projects that would have otherwise remained in the dark.

Another of Noated's big attractions was its news, which many users checked daily for updates of new scanlation (and fansub) titles, major releases by certain groups, official anime releases in Japan or the U.S., and anime-related events. All news was provided by Noated's forum members, and there was barely any restriction on posting news updates. Together with its anime and manga directories, Noated was much like a miniature form of Manga Jouhou, AnimeSuki, and Anime News Network combined together.

The biggest part of Noated was its community. Noated contained many sections including anime, manga, trading, fan art, learning Japanese, etc. It was a generic community that was not attached to a specific scanlation or fansub group, and thus was free of influences from major scanlation and fansub groups. Some people, including Dual Translations, complained about Noated being infested by Japanese-wannabe fanboys. As a result, Noated's forum had been subjected to flame on many occasions. 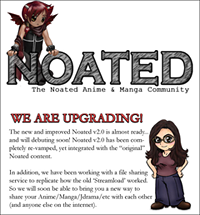 Before 2002, one of the only ways for scanlators to get words of their website out was to add it to Noated's database. However, around 2002 Typus left Noated, taking the site with him. Others, including jojo_da_crow and DiSpy, tried to build Noated back up, but by the time the site was brought back, others like DailyManga had already replaced the void it left behind.

In 2004, after going through some troubles trying to update its website engine and migrated servers, Noated moved from its original www.noated.com domain to www.noated.net. By this time, the site's news rarely received any updates, and sites like Manga Jouhou and AnimeSuki had already replaced Noated as the dominant directory sites in the community. Although Noated continued to add new functions to its own website, it was but a shell of its former self. In 2008, Noated announced that a new version of the site was in the works, but since then there has been no news on the status of the new site.