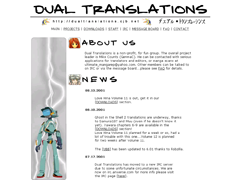 Dual Translations is a popular shounen-oriented scanlation group formed sometime in 2000. The group was originally founded by GenmaC as a "non-profit, for fun group" that translated doujinshi, but was later turned into a scanlation group.

Thanks to its popular shounen projects, Dual Translations became a dominant group in the early 2000s alongside others like Toriyama's World and ShoujoMagic, and was responsible for introducing countless manga fans to scanlation through its scanlation of Love Hina. According to the site's FAQ section:

Dual Translations is a group of like-minded people who translate certain Japanese and Chinese comics to English (and Spanish, French, etc. sometimes) so that fans of this genre can enjoy them. We make no money, and when a 'real' company licenses a manga, we stop distributing it. Our goal is to simply share this enjoyable literature with the world, and give it a little exposure. Japanese companies are used to this, and actually appreciate it, as it often creates or stimulates a market for a particular comic book.

Some of Dual Translations's projects included Saishuu Heiki Kanojo (SaiKano), Hellsing, FLCL, Excel Saga, Devil & Devil, and last but not least, its signature project, Love Hina. Love Hina was originally scanlated by darkshard's Mangascans, after Mangascans scanlated all eight available volumes of Love Hina in 2001, it disbanded. GenmaC, a friend of darkshard and staff member of Mangascans, decided to pick up the manga through Dual Translations. At first, most of Dual Translations's Love Hina files were hosted on a website by GenmaC called Love Hina Party! (the name is based on a located at dual.itgo.com), but soon the group moved all its scanlations to its own domain at dualtranslations.org and dualtranslations.cjb.net.

Although Dual Translations was on good terms with most groups, it did have an interesting feud with MangaProject that persisted for most of the group's lifetime. The rivalry was not about scanlating the same series (the two groups scanlated different kinds of shounen manga), but over group policies and ideals. Over the years, Dual Translations also enjoyed a particularly good relationship with Toriyama's World. In 2001, GenmaC, along with Toriyama's World's AK of Troy and two others, launched an e-store called MangaSource.com:

Please check out the latest and greatest manga store, Manga Source. This store is made available to you in a combined effort with Toriyama's World. If you would like to buy manga, please buy from us...you support both our translations and the original authors by doing this!

The project sparked some tension between Dual Translations and other big groups like MangaProject and MangaScreener, both of which disliked the methods employed by Dual Translations and Toriyama's World to promote the store. MangaSource never got off the ground and was shut down after a few years. 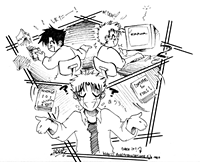 Dual Translations took down Love Hina after the manga was licensed by Tokyopop. Although the group went on to scanlate other series, it began to lose momentum. The group's staff members left one after another, some went on to form new groups and sites such as Starakin's LoveHina-Party, which was a scanlation download site based on Dual Translations's IRC channel of the same name. In time, Dual Translations became more of a hub where old members hung out rather than a legitimate scanlation group.

By late 2002, Dual Translations more or less ceased operation, but some members from the group stayed around, and the group became a place for old members to hang out. But by late 2004, the group was for all intent and purposes dead, and its website had completely disappeared. Although Dual Translations was very popular and played an important role in the early development of scanlation, few remember the group nowadays.