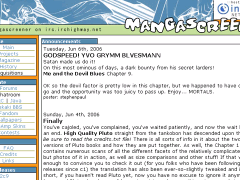 MangaScreener is a shounen/seinen–oriented scanlation group well-known both inside and outside of the scanlation scene. Having existed since almost the beginning of modern scanlation, MangaScreener is respected by many around the community and is often mentioned alongside other giants of scanlation like Toriyama's World and MangaProject.

Ryokurin, created in 1997, was an electronic magazine devoted to information on Japanese entertainment and culture. By 2000, Ryokurin had a section on its site called "Manga Screener" that offered "fantranslated manga" (which were at first translated from Chinese):

Eventually, MangaScreener grew into a separate project and, in late 2001, relocated to mangascreener.com. Ryokurin ceased operation in 2002 and became a personal blog of sorts for Izumi; by 2003, it was offline entirely. MangaScreener, on the other hand, grew into one of the premier groups in the scanlation scene.

The original intention behind MangaScreener was to introduce quality Japanese manga to the English-speaking crowd. Like a screener who views television shows before they are aired, MangaScreener aimed to give its readers a taste of the best manga from Japan. If MangaProject was the elite group that produced high-quality scanlations, MangaScreener would be the group for the common man that offered a simple taste of stand-out series from Japan.

In addition to emphasizing quality over volume, groups like MangaProject also employed a different distribution system than MangaScreener. Other groups distributed their scanlations in .ZIP files, while MangaScreener's was entirely web-based; readers viewed the scanlated manga in-browser on the MangaScreener site. According to Izumi: "[the group] felt (originally) that releasing manga in zip files encouraged hording, and would discourage people from buying the manga when it became available. Eventually we were eclipsed by ToriyamaWorld and other groups for a time; it was probably because of our slow acceptance of zip files that made us fall behind."

In its early days, MangaScreener mostly scanlated shounen manga. Its work included Love Hina, One Piece, Samurai Deeper Kyo, Shaman King, and, last but not least, Naruto (MangaScreener was the first group to scanlate Naruto and the first to translate Love Hina, although Love Hina was dropped after about five chapters). Other groups like Toriyama's World started to enter the shounen scanlation arena between 2001 and 2002. Tired of competition from these other groups, MangaScreener gradually moved toward more obscure manga that are usually aimed at more mature audiences.

In 2002, MangaScreener was one of the most well-known and popular groups in the scene. Then in late 2002, group founder and leader Izumi stepped down to became a regular staff member, handing the leadership position over to the group's celebrity translator, flyingrobots (Stephen Paul). flyingrobots is perhaps one of the most well-known and respected translators in the scanlation community. Because he worked on a large number of manga and produced high-quality translations while maintaining a consistent speed, flyingrobots was highly regarded by many other groups for his work, and newer translators looked to him for inspiration. Thanks in part to flyingrobots, MangaScreener became the source of many high-quality and popular scanlations, including classics like Monster, 20th Century Boys, I'll [Generation Basket], and Beck.

Over time, other groups started picking up many of MangaScreener's shounen projects, a practice which clashed with the group's strong sense of scanlation ethics. MangaScreener often found itself involved in conflicts with other groups such as Toriyama's World/Dual Translations and Manga-Daisuki/Null. Of course, most of these conflicts were short-lived, and everyone involved maintained friendly relations for the most part. MangaScreener also worked on a number of projects with other groups. Some of their favorite joint partners included Omanga, Hawks, and Kotonoha; the groups often shared staff members.

Like many other older groups, MangaScreener dropped a project as soon as its base manga was licensed. Because of its popularity and strict sense of ethics, MangaScreener was one of the few groups well-known in the outside world and maintained a positive image with publishers and manga professionals; it was probably the second most well-known group next to Toriyama's World. MangaScreener was often the subject of articles and interviews about scanlation, and some of its staff members went on to work in the manga industry. In fact, after Beck was licensed, MangaScreener translator flyingrobots went on to do the translation for Tokyopop.

As with most other older groups, MangaScreener began to lose momentum by 2006. With most of its staff getting older and moving on with their lives, releases grew infrequent. By 2008, MangaScreener was for all intents and purposes defunct. In late 2009, there have been rumors amongst the MangaScreener staff to reivive the group, and on November 1st, 2009, flyingrobots announced his retirement, as well as the fact that MangaScreener was still alive. However, releases were few and far between, and updates all but stopped after the 2011 December 31st Happy New Year post. In late 2014, 14 years after the group's creation, MangaScreener's website finally closed down, marking the end one of the most popular, and longest-lived groups of olden day scanlation.