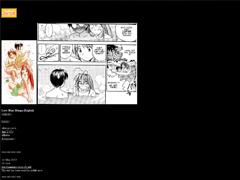 In 2000, darkshard, seeing that there were already many fansubs groups out there but no organized group dedicated to manga, decided to create a group that would be dedicated to scanning and translating manga, and so the first modern scanlation group was born.

Started around April 2000. This site was the founder and first of manga fansub group on the internet. Its been many years before this time, that I've always wondered why there were so many anime fansub groups but no manga fansub groups around, which was why I decided to set one up. We are the first manga group that started a manga series and completely finish the series. Starting with I''s, DNA^2, then finally Love Hina. Quality wasn't really a priority back then. In fact, the I''s Manga project finished in just 2 months. From MANGASCANS ashes many such fansub groups have grown. Most, now using our favourite manga editing font, wildword.

After Mangascans was formed, the group met in the IRC channel #mangascans on DAL.net, a meeting place for many like-minded individuals. Most translators and scanlators at the time had no IRC channel of their own, so the channel was a public channel where scanlators went to distribute their work. People gathered in #mangascans to talk about manga and obtain the latest releases from Mangascans and others.

Many people volunteered to help Mangascans, one of them was ZlleH. In no time ZlleH became an important staff and helped darkshard run Mangascans. As time went on, ZlleH felt that conversation between staff on scanlation projects interfered with general manga discussion in #mangascans, so together with Ichijo, the two formed a new channel at #MangaProject.

The new channel was intended to focus on project discussions between staff, and was only known to Mangascans members. After ZlleH released a new project from #MangaProject and subsequently created a website at mangaprojects.com and mangaproject.cjb.net, the group MangaProject, led by ZlleH and Ichijo, officially came into existence. Coincidentally, around this time Mangascans also finished scanlating Love Hina, and most of its staff, including darkshard, moved on to MangaProject, resulting in the demise of Mangascans.