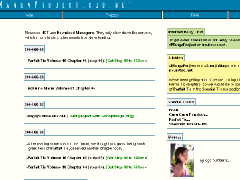 If there was a Hall of Fame for scanlators, MangaProject would most definitely have a place in it.

In 2001, darkshard's scanlation group Mangascans had already established itself as a successful group, and showed that a well organized and structured group was more likely to succeed and flourish. Mangascans attracted many volunteers, one of which was a person by the name of ZlleH. In no time ZlleH became an important Mangascans staff and helped darkshard run the group. As time went by, ZlleH felt that conversation between staff on scanlation projects interfered with general manga discussion in #mangascans, so together with another person by the name of Ichijo, the two formed a new channel at #MangaProject.

The new channel was intended to focus on project discussions between staff, and was only known to Mangascans members. After ZlleH released a new project from #MangaProject and subsequently created a website at mangaproject.net (the domain went down later and was replaced by mangaprojects.com) and mangaproject.cjb.net, the group MangaProject, led by ZlleH and Ichijo, officially came into existence. Coincidentally, around this time Mangascans also finished scanlating Love Hina, and most of its staff, including darkshard, moved on to MangaProject, resulting in the demise of Mangascans.

When darkshard ran Mangascans, all coordination was conducted through email, and the quality of the group's work left much to be desired. One of the main goals of MangaProject was to provide high quality scanlation, and high quality scanlation it provided. Under ZlleH's management, staff coordination was moved from email to IRC to take advantage of real-time communication; translations, scans and editing had to meet strict standards set by ZlleH, and those who wanted to join MangaProject were even asked to take a test, something unheard of at the time. In the end, all these efforts resulted in MangaProject releasing extremely high quality scanlation (by the old standards), and the group quickly gained popularity among the fans.

By 2002, MangaProject was already one of the biggest groups in the scene, with hundreds of users in its IRC channel at any given time. At its peak, #MangaProject had over 1,000 users, something that was quite rare in the IRC world back then.

Some of MangaProject's top projects included I''s, Video Girl A.I., Touch, and Kimagure Orange Road. The group attracted a wider audience by scanlating both shounen and shoujo titles. In the early days, MangaProject also helped out groups like ShoujoMagic that were just getting into scanlation, and in later years some of MangaProject's staff branched out to form groups of their own. MangaProject was instrumental in fostering a community where most groups knew each other well and shared staff members. 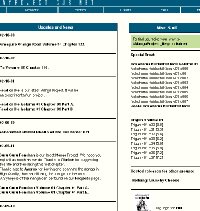 In late 2002, MangaProject and Toriyama's World were the two biggest groups in the scene, other groups like MangaScreener, SnoopyCool, Dual Translations and ShoujoMagic were also very active. Rivalries and drama occurred often. There were also a fair amount of controversies. For example, although MangaProject dropped its projects once they became licensed, around 2002 an "underground" group by the name of The Furry Triangles, or TFT, appeared in #MangaProject and began distributing scanlation of licensed series as well series that might cause problem among other groups. Due to TFT's elusive nature and distributing their work in MangaProject's IRC channel, many thought TFT was run by staff from MangaProject, and most people never found out the true story behind TFT.

As years went on and the original MangaProject staff grew older, real life began taking its toll on the scanlation group. By mid 2005, Toriyama's World was by all means and purposes defunct, and MangaProject was on a decline as well. The group posted this on its website:

Been a while.
MangaProject's staff have found themselves lately to be more partying and having fun then "working" on manga. It's to the point where we reject editors and translators because we are busy with real life. We also got news that our main filehost for many years now, will have a bandwidth reduction.

So, to save us from feeling like this hobby is starting to feel more like work then fun, we have decided to concentrate on going back to what we started out as in the old days which was just having fun.

We have decided to move back to irc.irchighway.net in the channel #mangaproject

We have given some projects to certain groups. We will also continue on with some projects. But we will go back and concentrate on the old days of just letting people grab mangas from the channel.

Since then, MangaProject slowly gave its projects away to other groups. Finally in mid 2007, MangaProject officially closed shop. Although the group known as MangaProject ceased to exist, the #MangaProject IRC channel continued to exist, and many former staff and friends would still gather in the channel to talk about manga and life in general.