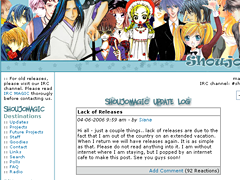 ShoujoMagic is a shoujo-oriented scanlation group which scanlates manga from genres ranging from typical shoujo to more adult shoujo manga. ShoujoMagic is one of the largest groups to ever grace the scanlation scene. At its peak, the group had over seventy active or complete projects under its belt with over fifty new projects planned. Despite the large number of projects, the quality of ShoujoMagic releases was also highly regarded by the community, making ShoujoMagic one of the most respected and most prolific groups around.

In the very beginning, before ShoujoMagic even existed, a user by the name of chry18 (who happens to be a girl!) started a Hana Yori Dango (Boys Over Flowers) project on her website Leely.com. According to chry18:

Initially, I only scanned in a few pages of the Manga for my friend in Australia who didn't manage to finish reading the Manga before she returned to Australia (Yes, juz, I'm referring to you). Then I decided, why not just put it onto a website and share it with all HYD lovers around! I set up a website on a free web host and was encouraged by the nice comments visitors left and decided to expand this website. I found some pretty good and cheap webhosts and revamped this website in May 2002. It is currently hosted on 2 different webhost, so if you find some pages loading faster than other, you know why. I'm testing out to see which is better before transferring everything to one host.

Why leely.com? Well.. leely is sort of my initials. It is the main website, holding the frames of this website. I have another domain, hydmagic.com which houses my gallery, but you won't be able to enter the main site from there.

Some of the people who have helped me a lot in the creation of this website are Aries (HYD Portal) and DeeDee (HYD Garden). If you've gone through this website, you should realize quite a lot of credits to them.

chry18 later met another shoujo fan by the name of Siana, and, in December 2002, the two decided to start a scanlation group called ShoujoMagic. Below is a short history written by Scanlation.net's Janice for ShoujoMagic's fanlisting (included with the history is a short interview with Janice conducted by Siana):

Before SM was officially open to the public as a scanlation group, it had been a subdivision at Leely.Com. Chry18, the owner of Leely, is a manga maniac who especially loved the popular manga series Hana Yori Dango. The original version of SM was made as a great fan site for HyD with detailed summaries, chapter translations and free scans.

So how did SM turn into such a popular scanlation group, you ask? Well, we must owe all our thanks to the fateful encounter between Chry18 and Siana, the current head administrator of SM ^_^ Siana is a big HyD fan as well as a Shinjo Mayu lover (Shinjo Mayu is a well-known adult mangaka), and seeing that Chry18 was also interested in the same business, the two wonderful ladies decided to start a scanlation group with a genre that no other scanlators had focused on much at the time:

At the time of ShoujoMagic's founding, MangaProject was already a well-established and successful group. ShoujoMagic was still fairly small and inexperienced, so Siana would often venture into #MangaProject to seek advice.

Although manga translations and scanlations had been around many years before ShoujoMagic, most manga available online were shounen series like Dragonball, Ranma ½, and Love Hina. Shoujo series were sparse and elusive, and only a few groups, such as Certhy and MangaArt, scanlated shoujo manga at all. ShoujoMagic was the first major group to cater to women and became a smash hit in the budding scanlation scene.

Some of ShoujoMagic's early projects included BxB Brothers, Ichigo Channel, Hana Yori Dango, and Fruits Basket. ShoujoMagic's projects generally came from magazines like Sho-comi and Margaret. By this time, many of chry18's projects were hosted on either her own site or by ShoujoMagic. Some of these projects included Hana Yori Dango Magic, Furuba Magic, Margaret Magic, and Sho-comi Magic. Go here for a description of each project given by chry18 on Leely.com.

On March 29, 2003, all the projects with the exception of Hana Yori Dango Magic were taken down:

ShoujoMagic also had a section called Steamy Magic (which also existed back when ShoujoMagic was simply a subsection of Leely.com called Scanlation Magic), which was a place for all of ShoujoMagic's more ecchi and mature scanlations. According to Steamy Magic's "steamy mission":

Welcome! Steamy Magic is a division of Scanlation Magic from leely.com. We are geared at releasing shoujo stories with a more ecchi feel. That is couples that fall in love and have sex, or the other way around ^_^. We hope you enjoy our shoujo smut ^^

By 2004, ShoujoMagic was a well-established group. It had over eighty staff members working on over seventy projects with over fifty new projects planned, making the group one of the largest, if not the largest, scanlation groups ever. At its peak, the ShoujoMagic IRC channel, #ShoujoMagic, had over 900 users. #ShoujoMagic, together with #MangaProject, became the center of the IRC community around 2003 and 2004 when most scanlation channels were located on mIRC-X. Siana was an excellent leader and organizer who ran ShoujoMagic like a company and managed to release a chapter every single day (save for a few special occasions, but then again, there were days when multiple chapters were released) between 2003 and 2005, a feat most other groups could only dream of. At the beginning of 2004, ShoujoMagic worked with Janice's Scanlation.com to create ShoujoMagic Fair, a website that hosted ShoujoMagic's releases.

Over time, chry18 gradually faded from the group, and Siana took charge of most operations. Although chry18 no longer participated actively in ShoujoMagic's activities, she still owned the shoujomagic.com domain and used it for her Hana Yori Dango fansite. chry18 also helped host ShoujoMagic's website in 2007 when the group ran into trouble with its web hosting.

ShoujoMagic was very friendly towards other groups, especially their fellow shoujo scanlators. It often collaborated with other groups on projects. On Christmas of 2003, ShoujoMagic teamed up with six other groups to work on a "Christmas Bonanza" that saw each group scanlating a chapter from the manga Zig X Zag.

In mid-2005, ShoujoMagic unexpectedly lost its domain shoujomagic.org and was forced to move its website to shoujomagic.net.

By 2006, much of ShoujoMagic's older staff had grown busy in real life. With a large number of projects still active, ShoujoMagic had trouble maintaining its old productivity. By this time, the group had over 150 active, planned, and finished projects, and a large number of those projects were smut shoujo (shoujo manga that contain a lot of ecchi or mature scenes) like Ren-ai Shijo Shugi, which was partly due to Siana's love for Shinjo Mayu, a well-known adult-shoujo mangaka whose works often appear in anthologies like Sho-comi.

ShoujoMagic relaunched its website in November 2006, replacing the theme it had used for over four years with a new pink layout (one of the main reasons behind the relaunch was to make the site more manageable and to introduce direct downloads on the website).

After running ShoujoMagic for over six years, Siana officially announced on March 21, 2007 that she was retiring from the group and turned over leadership to long-time friend and staff member jojo_da_crow:

At the time of her retirement, Siana's master list of ShoujoMagic staff, maintained from the time she started until the time she quit, held over 200 contacts.

ShoujoMagic's operations took a serious hit when Siana retired. ShoujoMagic had already overextended itself and become somewhat bloated with unfinished projects. Both active and planned projects were cut back to match the group's available resources. Later that year, ShoujoMagic encountered some problems with its host, and the group's direct downloads had to be taken down.

Without Siana's leadership, ShoujoMagic slowly lost its momentum. Members disappeared one after another. By 2009, argentum_telesto was leading the group and posted the following announcement in February of that year:

Well, it's unfortunate that it's come to this, but here's the situation, ShoujoMagic has no fulltime editors except for me. My co-leader is missing and she has all of the translator's emails and whatnot so I have no way of getting in contact with any of them... so essentially no translators. (If you are one of them please contact me) We have one scanner, jojo, and one fulltime QCer (that'd be me again).

That basically leave ShoujomMgic with two staff members. And... I cannot run ShoujoMagic with only two people. I'm already doing so much (spot translations, editing, QCing, finalizing) that I'm going nuts trying to release just once every two weeks and now with my co-leader's total disappearance and the loss of all the translators, I can't do it anymore... so I'm asking for help.

If I am unable to find more staff members I will have to close ShoujoMagic. I'd love to be able to keep bringing you all scanlations, but I need some help to do it. I am also open to joints for some projects if you have a group that has some bored staff.

The cry for help was answered, and ShoujoMagic managed to recruit some new staff members. The group, after cutting back its active projects, resumed operations.

As ShoujoMagic slowly declined, the void it left behind was slowly filled by newer powerhouse shoujo groups like Aerandria. In 2009, ShoujoMagic, although no longer the powerhouse it once was, still functions as a scanlation group, maintaining a slow but consistent output of shoujo manga scanlations.

In September of 2009, argentum_telesto finally announced that ShoujoMagic was closing its doors (the group's website later went down in 2011):

Well, it's been a long run. For me probably only about 4 years, although ShoujoMagic had existed for quite a while before that. Finally it's time to close shop.

Sadly, I am no longer able to devote the time needed to run this group and with no one to take my place I will be closing the doors behind me, as it were. I hope you've all enjoyed this crazy ride as much as I have. As frustrating as it's been at times it's taught me quite a bit about leadership, friendship and responsibility.

I'd like to thank all the staff past and present who have given their time and effort to this group. It still astounds me that there are people willing to work so hard to put out great scanlations for no money and very little credit.

As for specifics of closing, we actually have some partially completed chapters I'd like to finish up before completely shutting down. There are some series I will be finishing and some I will be dropping. So there will still be a few releases yet. I don't anticipate the group to completely close for a few months, although we won't be taking on anything new or starting any new chapters.

Lastly, I'd like to thank all of you for supporting ShoujoMagic throughout the years. This group has always been about bringing manga to the fans, and sharing the stories that we all love with the rest of the world.