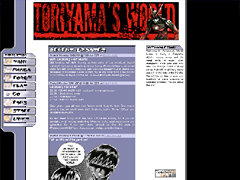 Toriyama's World was, and probably still is, one of the most popular and influential groups ever existed. When Viz began licensing Shounen Jump titles, rumors had it that some of the licensing decisions were influenced by Toriyama's World.

Toriyama's World was founded in March 2001 by AK of Troy and Gotenks243 (Mike) on GeoCities (but it soon moved to its own domain). The group started small, but in time, it became one of the most dominant scanlation groups on the scene, largely thanks to its portfolio of popular projects, including Naruto, Hikaru no Go, Bleach, Hunter X Hunter and Fullmetal Alchemist, all of which remained popular choices for scanlation long after Toriyama's World dropped them. In 2001, when none of the previously mentioned titles were available in the U.S., Toriyama's World was one of the very few places where English fans could get their fix of shounen manga without knowledge of Japanese or Chinese.

Just as its name implies, Toriyama's World originally planned to focus on manga by Akira Toriyama, but ended up scanlating other popular shounen series, including the extremely popular Naruto and Hikaru no Go. Unlike speed scanlators of later years, Toriyama's World did not release weekly chapters of Naruto or Bleach from magazine scans, but worked from tankoubons, and on rare occasions even translated from French (Hunter X Hunter was translated from French by Ndrizz).

There were two kinds of scanlators: those who dropped a series when it got licensed, and those who did not. Toriyama's World belonged to the former group. In mid-2002, when Viz licensed Naruto, to many fan's dismay, Toriyama's World decided to drop the series and encouraged readers to buy the official version instead. The same thing happened later when Hikaru no Go was licensed; Toriyama's World dropped the popular project and went on to support Viz's publication of it.

Around 2001, Toriyama's World, with the help of Dual Translations, opened an e-store at MangaSource.com:

MangaSource was started back in 2001 by four guys who wanted to spread some of the world's greatest manga outside of its home country, Japan. It started as a very small e-store that offered manga at a competitive price. Since then, we've expanded our horizons to information, reviews, previews, etc. Our main goal is to give people the information they need on some of the better series coming out of Japan, as well as news about the current happenings in the manga industry overseas. 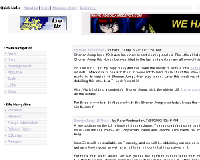 The project sparked some tension between Toriyama's World and other big groups like MangaProject and MangaScreener, both of which disliked the methods employed by Toriyama's World and Dual Translations to promote the store. MangaSource never got off the ground and was shut down after a few years.

This is actually the two year anniversary of TW, can you believe it!? Two years since I started the site on Geocities (oh the horror...) and got 10 hits the first day!!!! Oh the memories. Back then I spoiled you with 25 Naruto chaps in 25 days and it still wasn't enough. ("When's the next one coming!!?" "Hey, it's been 15 hours already, Naruto me!!!" etc.) Back then I was all alone...(well, with Mike). No editors, no layout designers, no nothing. Yet through hard work and dedication, and thanks to the support of people like you TW is now the greatest website-related thing of ALL TIME!!! (not counting free porn...)

This has been a very interesting 2nd year for us. Frankly I can't remember much of it because my brain is fried from translating so much but I assume it was interesting. We're now up to 150 chapters or so of Hikaru no Go, who would have ever thought!? What sick group of people would want to do that much work? Oh yeah...us... Damn... But the biggest news of the year concerned Naruto as we took down our scans with the licensing of the series here in the US. This was a great event as manga becomes more and more popular and widely accepted. Year two also marked TW's jump into fansubbing with the Naruto anime and the whole team has done a great job. Thanks to all of you guys (Aznguy, Jaggedblunt, Ookla, Retrooo, Mike, Mogi, Asura, sailormoon2099, Aniki-Kun, JediNight, Psychology101, aQuAaNjL, sera, etc.). And of course all the manga staff who works super hard scanning and translating and editing despite the fact that I keep them in a dungeon and don't feed them until they complete their job. Great work guys (Retrooo, ndrizzt, Ookla, Barabus, Elae, ssjtrunks130, Digital Enigma, Giant X, DraygonZero, DynamiteNeon, eK, crispy, Illaparatzo-sama, Atamar, OoOx, Kaji, kbned, Lena, RBwaBD, Pedero, and anyone else I forgot)!

We also went through some serious problems with servers but it seems like we have braved the storm for now. I think Ookla will have some announcement about that soon. Hopefully TW can continue to strive and be the beacon of hope in this cruel dark world.

Not losing its sense of humor, a couple days later, on April 1st, the following announcement appeared on the front page of Toriyama's World:

The ASCII site and the HnG chapter stirred up quite a few fans, and Toriyama's World received some angry responses, as an update a few days later showed: 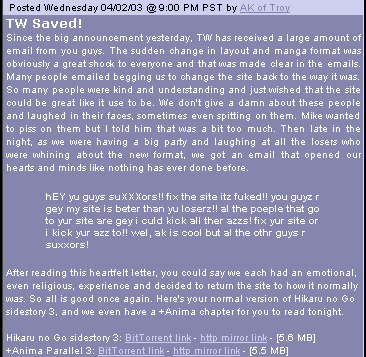 Of course, nothing good lasts forever, as manga became more popular in the U.S., more series became licensed. Many of the licensed manga were popular shounen series scanlated by Toriyama's World (not a coincidence, considering Toriyama's World became popular thanks to its choice of popular shounen manga). Although Toriyama's World dominated the scene in the early 2000s, the group dropped many of its popular projects throughout 2003 and 2004. With no new showstoppers being picked up, people began migrating to scanlation groups that scanlated licensed series. Finally, on March 31st, 2006, AK of Troy posted the following announcement on Toriyama's World's homepage:

Wow, can you believe that this is the 5th anniversery of the website? The time has gone by so fast. What started off as a brilliantly designed webpage done on Geocities soon became the biggest scanslation site on the net! After hundreds of chapters and copycats, the site would start to lose it's luster as series after series that we did became licensed(coincedence...?) but the spirit lives on! It's been a lot of fun maintaining the site for 5 years. I've received countless emails from great people supporting the site, appreciating the hard work, demanding Naruto chapters, etc. I know the site has been dying a slow death and there's not much work put into things anymore. I've been doing my part with Kinnikuman scripts and we've had great help from Cousin Ted who's been editing it.(Thanks Cousin Ted, you rock!) So we have some new chapters of that tonight. I'd love to do more RokuBuru(the story is just getting to the good part) and other projects but unfortunately nobody's really stepped up to the plate lately. There's been rumors of the site shutting down this year and that will probably happen. It's been very nice this week to see the outpouring of emotion over the site closing down and reading people say how much they have loved the site on the forum. Thanks, guys! Thanks for supporting the site so long and always providing amusement. And thanks to everyone who has worked on the site over the years, too. It's been like 100 people...so many. All of you are much loved by me, except DDRtatsujin...you suck.(you know why!!) Thanks for a wonderful five years!

Since then, updates practically stopped, marking the end of a scanlation giant. Some Toriyama's World staff joined other groups; some went on to work in the industry; some simply moved on with their lives. In late-September of 2009, Toriyama's World's website finally went down, and so ends one of the giants of scanlation.