Band of the Hawks 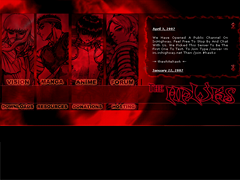 When it came to high-quality mature manga in the early 2000s, no one could compete with Band of the Hawks and Project Omanga.

Band of the Hawks was formed in 2001. The group was originally intended to be a fansub group, and aimed to pick less common but interesting series. A manga division was created later and was led by a staff member by the name of Gatsu.

Led by Griffisu and Gatsu, Hawks tackled manga scanlation and anime fansub, both of which were highly sought-after by fans. Gatsu managed The Hawks's manga division and turned the group into one of the few group in scanlation history whose work truly deserved the label of "High Quality" (although the utmost quality wasn't among the group's goals in some instances). The Hawks didn't scanlated licensed series, but it made an exception with the scanlation of Berserk after the manga became licensed in the U.S. Below is the group's mission statement as stated on their site:

Formed In 2001, We Have Strived To Do Projects That Are Overlooked By Most Groups Such As Berserk Manga, Grappler Baki, Koroshiya Ichi Manga And OAV, Salaryman Kintaro And The List Goes On And On. Our Projects Are Always Interesting To Us And People Seem To Love What We Do. Most Fansub Groups Have No Originality In What They Sub Or They Turn Their Team Members Into Slaves. We Distance Ourselves From Such Practices And We Don't Succumb To Public Pressure To Rush Releases. In Our 4+ Years Of Operation, We've Only Released One Release Earlier Than We Should Have And It Was A Personal Choice. There Are So Many Goals We Have Yet To Accomplish Because There Are So Many More Projects Left To Do And So Many More People Around The World That We Want To Reach. To Our Fans Across The World, We Really Appreciate All The Support You've Given Us Over The Years. To The Many Fansub Groups That Want To Sub Our Releases To Their Native Languages, We Approve of It As Long As You Credit haWks In Your Releases And It Would Be Cool If You Would Drop Us A Line With Your Website So We Can Check The Finished Products Out.

Hawks released many "overlooked" manga and anime projects, and one of its most popular fansub projects was Grappler Baki. As for scanlation, Hawks was known for none other than Berserk, the manga that the group got its name from. Hawks always released two different versions of Berserk, a smaller "low quality" JPG version and a "high quality" PNG version whose file size was much larger than usual scanlations of the period. Before Hawks came along, one of the few ways for fans to get their Berserk fix was to read the translations from SkullKnight.net, a Berserk fansite founded in 2001. The Hawks also had its own celebrity staff member in the form of Gatsu, who was well-known in the community for his extremely fast editing skills. Not all was good, however, for quite a few people in the community were rather annoyed with some of Gatsu's incredibly fast techniques that typically didn't involve performing double page joints, adding sfx, or styling text.

Hawks continued to scanlate Berserk after Dark Horse licensed the manga in 2002, something that sparked a few controversies among the community. In the beginning, Hawks tended to release their manga on IRC, and many IRC "newbies" had trouble downloading their releases. As time went on, most of Hawk's releases were made available on BitTorrent, making Hawks one of the first groups to embrace BitTorrent as a distribution channel.

In the early days, a large portion of seinen scanlations was produced through combined efforts of Omanga, Hawks and MangaScreener. Most releases from Omanga, Hawks and MangaScreener were of great quality. The three groups shared many staff. The manga wing of Band of the Hawks worked so close with MangaScreener that at one point it was, for all intent and purposes, absorbed by MangaScreener. By late 2005, Hawks was mostly defunct. In early 2009, Griffisu reappeared with news of a comeback of the group's fansub division, and has since been actively recruiting new staff members.