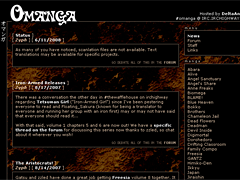 When it came to seinen manga (non-kiddy stuff) in the early 2000s, no one could compete with Project Omanga and Band of the Hawks.

Project Omanga was founded in 2001 by a person named Shiru, and the group's earliest members included Shiru, BIoodberry, kbned, ndrizzt, and Barabus. A person by the name of Zyph joined the group later, and soon became very good at managing the group. In September of 2002, Shiru left Omanga after some internal disagreements and Zyph took over the group. Since then, Omanga grew in popularity and eventually became a well-respected and influential group among its peers.

Omanga focused on scanlating seinen series, and some of its most popular works throughout the years include: MPD Psycho, Blame!, Samurai Deeper Kyo, Angel Sanctuary, Gantz and almost anything by Tsutomu Takahashi and Tsutomu Nihei. Omanga was originally a small team led by Zyph, but soon expanded into a large group scanlating multiple projects simultaneously. 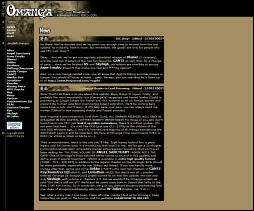 After 2005, Hawks was in effect defunct, and Omanga began collaborating on projects with newer groups like Kotonoha, which also shared Omanga and MangaScreener's vision of bringing otherwise overlooked series to the fans. On August 3rd, 2007, Zyph had the following to say about Omanga's sixth birthday:

As of the end of July (say.. the 29th?) Omanga has been around for 6 years. Yes, we started out with a horrific red design for the web page, then a terror full of Kenshin masked in blue with way too many frames. Then nase came in and gave us our first good web design in 2002 and only a few short years ago, the current design.

Omanga continued to release scanlations well into 2007, but by then the group was no longer as dominant as it used to be, and in 2008 Omanga's site became stagnant. Most of Omanga's projects were removed from the site due to them being licensed in the U.S. In the meantime, many of Omanga's former partners like MangaScreener and Kotonoha also gradually ceased operation. By 2008, Omanga was in effect no longer operational.