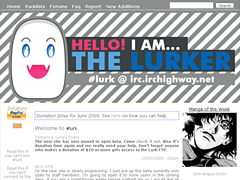 Lurk, despite being one of the larger and more well-known entities in the scanlation scene, is rarely talked about outside of IRC. Although in its later years, it grew more well-known to people not familiar with IRC.

What is Lurk? In its purest form, Lurk is a large manga archive residing in the IRC channel #lurk on IRCHighway. There are many bots in #lurk, each of which offers an extensive collection of manga for users to download. A few years after its creation, #lurk also began acting as a new release distribution channel for some scanlation groups. 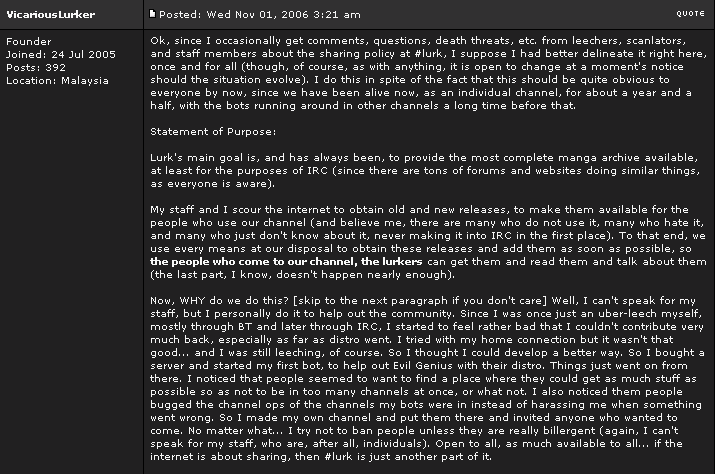 At the time, there were only a few IRC channels dedicated to distributing scanlations on bots, and one of the biggest such channels was CKMoney's #ckmoney. Most manga, however, could only be downloaded from the IRC channels of individual groups. VicariousLurker used his bot, Neverwhere, to host Evil Genius's manga in the channel #[Evil_Genius]. Evil Genius had other bots for distribution at the time, but Neverwhere was the most popular. Over time, Neverwhere was used to host other groups' releases as well, appearing in channels like #mangass, #ckmoney, #manga-rain, and #null. Because of Neverwhere's huge selection of series, it became a very popular bot.

Sometime near the end of 2004 or the beginning of 2005, VicariousLurker created a new secret IRC channel called #lurk where people involved with the Neverwhere bot lurked. One of the early topics in the new channel was "A place to hide..." Since Neverwhere was still present in other groups' channels, very few people even suspected a place like #lurk existed. Note that at the time, the #lurk channel only had around ten users, and the entity which later came to be known as Lurk was still non-existent; VicariousLurker was simply using his bots to help host manga for other groups.

At one point Neverwhere's name was changed to Delirium, but it was later changed back. Sometime after that, Neverwhere split into three bots: Delirium, Dream, and Despair. Delirium resided in #null and #manga-heaven, Despair was in #[Evil_Genius] and #ckmoney, while Dream was used for a few other channels, like #mangass. This did not last long, and the three bots were soon merged back into Neverwhere.

In early 2005, Neverwhere was pulled from most groups' channels. The sudden disappearance of Neverwhere caused quite a stir as many IRC leechers began asking about Neverwhere in various IRC channels. Soon the existence of #lurk, Neverwhere's home, became known, and more and more people joined #lurk as word of mouth spread. At one point, there was also a #lurk channel on Rizon, but since the channel on IRCHighway was much more popular, the Rizon channel eventually grew deserted. By this time, channels like #ckmoney were already all but defunct, and other manga distribution channels like #fileshare were invite-only, so #lurk became the only place where people could readily go to download manga.

A Lurker Network website utilizing the Null Bot Packlists Website engine and a new forum was set up in mid-2005 to help users download from #lurk. Later that year, a new website was created at GotLurk.net.

Aside from its manga bots, Lurk also had a special bot called [UR]Dan run by njt that offered raw, untranslated manga. Before 2005, manga raws were very hard to find, and scanlation groups often monopolized projects by keeping a firm lock on their raws. [UR]Dan helped make manga raws easily accessible to the public and played a key part in the movement that made raws a common commodity, resulting in an increase in speedscan groups. njt went on to create MangaHelpers but still managed the raw bot when time allowed.

Since then, the Lurker Network has grown into one of the largest manga channels on IRC. At its peak, the channel had over 1,600 users, more than any other scanlation channel. Of course, with popularity and a large manga archive came various problems. Lurk became known for the fundraising campaigns it ran to pay for its ever-growing server costs. Sometimes it also found itself in conflict with scanlation groups over manga distribution.

In late 2006, VicariousLurker retired and handed leadership over to Stalyn. By mid 2009, the Lurker Network had over ten manga bots, including specialized bots for artbooks and adult manga as well as bots acting as distribution channels for various scanlation groups. The Lurker Network offers over 60,000 chapters, or 1.1 terabytes, of manga, and has served over 530 terabytes of manga (that's 53 Libraries of Congress) since the time it began tracking its own traffic.

In June of 2009, Lurk unveiled the beta version of its new site to the public with the promise of better functionality and organization. According to the Beta site: "The goal of the new site and the new #lurk is to be more community focused. We want #lurk to be a great archive site dedicated to the hardcore manga readers/archivers."

In 2011, Lurk began having trouble keeping its server up due to resource shortages. On June 22nd, 2011, Stalyn announced that the Lurk servers have been terminated due to late payment.