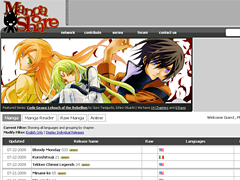 MangaShare tracks the latest scanlation releases in multiple languages and provides download links to those releases. Being an English-based site, MangaShare also offers an online reader for English only manga. After a 2007 merger with scanlator Binktopia, MangaShare has also been the home base for Binktopia, providing exclusive hosting to all Binktopia releases.

MangaShare was created in July, 2007 after a merger between the #blood-scanlations IRC channel and bludshock (a one-man group ran by bludshock, who later became known as blud). Around that time the only big scanlation listing/download/community site around was MangaHelpers. During MangaShare's founding, blud made the following announcement:

Thank you for visiting MangaShare.com. Chances are you were trying to get to BSManga.com or #blood-scanlations and found yourself at our doorstep.

I've personally wanted to start a manga forum for months, and all it took was some recent events for me to gain the motivation to get off my butt and do it. With a few quick words #bs was onboard with the plan, we put our heads together and this is the result.

Our goal with this website is to provide a fair & fun community to discuss & download manga with fellow fans. We'll do our best to let everyone express themselves as much as they want and only jump in when the line is crossed (see our rules & guidelines), staying far away from any tightass policies and unnecessary censorship.

All scanlators / translators / raw providers are free to share their work here in the release forums. If you contribute your own releases / translations in those forums you will be eligible to be put into the scanlator / translator usergroups. There are plans in place to make those usergroups very beneficial in the near future so stay tuned for that!

Unique to this site you'll find true direct downloads for the full volumes and latest chapters in each of the archive thread located inside the featured manga boards. Best of all they're absolutely free!

Since then, MangaShare has made many improvements to its website, including raw manga tracking, scanlations in other languages, anime, and even an Online Reader in October 2007. As MangaShare grew, it became a place where fans gathered to talk about their favorite series and scanlators met to talk about projects. MangaShare also had its own scanlation branch as a result of the merger (its scanlation branch was in all shapes and form the pre-merger bludshock), as a result the site also offered releases of popular shounen manga every week. 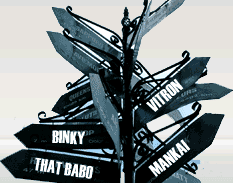 Binktopia is a shounen-oriented speedscan group formed in January of 2006, on a forum of the same name. The original forum, founded by Binky, wasn't a scanlation group, in fact it wasn't even a manga forum, but simply a place composed of multiple individuals that Binky had encountered around the Internet. Later that year, Binky teamed up with thatbabo and the translator Mankai and founded the scanlation group known as Binktopia, which used the forum as its base of operation.

Binktopia was one of those "speed" groups that symbolized a changing culture in the scanlation scene. After its creation, Binktopia scanlated popular Shounen Jump titles like Naruto and Bleach every week. Although the release quality wasn't as good as some of the established HQ groups of the time, Binktopia did fill its own niche as a speedscan group. Binktopia stayed relatively unknown for quite a while, but as word-of-mouth spread, and more fans began turning to speed groups that can release chapters in a reasonably fast fashion, Binktopia began to grow in popularity.

By 2007, both Binktopia and MangaShare were already well-established as groups that released weekly chapters on a timely basis. Both groups covered a similar range of series, and operated with similar expectations with regard to speed and quality. As a result, in late 2007, Binktopia and MangaShare merged into one entity; MangaShare became the site that listed releases while Binktopia was the scanlation side of the group. According to blud's announcement:

In possibly the quickest conceived and executed merger of all time, we're excited to announce that Binktopia and MangaShare will be joining forces to provide you with weekly manga scanlations. The new group's name will remain Binktopia, and all new releases will continue to be done from MangaShare.com.

The new group had more personnel and resources, had less competition for shared projects and increased its project portfolio. Also as a direct result of the merger, MangaShare became the exclusive distribution channel for Binktopia releases, providing direct download online reading capability that Binktopia never had. Due to the fact that both groups shared some staff prior to the merger, the merger itself went fairly smooth and proved to be a great move on both group's parts.

Since the merger, Binktopia and MangaShare continued to grow in popularity, but the group did encounter some problems as well, in 2008, there was an incident involving BleachExile, where BleachExile hosted Binktopia releases after removing the credit page. As a result, MangaShare/Binktopia has come to a unanimous decision to watermark random pages of their scans. Other conflicts included a dispute with fellow speedscan group SleepyFans over Binktopia's raw provider Manyou (a Chinese scanlation group). This conflict became one of the many reasons that ultimately lead to MangaShare/Binktopia dropping Naruto (the series was pickeded up again in early 2009).

Despite various setbacks, MangaShare/Binktopia continued to provide weekly scanlations of popular shounen manga, the quality of which were usually better than many speedscan groups on the scene. As with most groups that have been scanlating for a longer period of time, MangaShare/Binktopia is in the process of gradually moving from focusing on speed to focusing on quality, all the while still maintain a consistent release schedule.