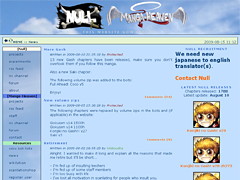 Null is a shounen-oriented group founded by kal-, elvisrules and members from other shounen groups in 2002 as an independent group to scanlate weekly shounen manga.

Null was originally founded to scanlate Naruto, but the part of the group that scanlated Naruto soon split off from Null and joined another team to form Inane. Since then, Null has focused its attention on other shounen manga, including the group's signature series, One Piece.

According to kal- on Null's own history page (which contains a more comprehensive and detailed history):

Null started doing Naruto from chapter 106 when Toriyama-World stopped scanlating it. Fans shouldn't have to wait years just to read the next chapter. We were staff members of existing manga groups and we decided to release just for productive leechers: editors, translators, fservers, scanners, etc... Do something for the manga community and you'd get our manga!

Null could be classified as one of the first speed scanlators since the group's original goal was to release Weekly Shounen Jump manga as they are made available. However, despite its emphasis on speed, the quality of Null's scanlation is much better in comparison to the quality of speedscan groups formed during and after 2005. Although regarded more as a speed-oriented group at the time of its founding, by 2009, Null is recognized by most as both a high-quality group as well as an experienced group that has endured the test of time.

Throughout its life, Null experienced quite a few bumps in the road. In late 2002 and later 2004, Null came close to suspension due to the absence of its administrators. Also, in 2002, Null and its parent group Manga-Daisuki got into a heated debate with MangaScreener over the use of One Piece translations (chapters 182–183) from MangaScreener's Stephen.

Although Null lost many of its members in 2002 when the Naruto division of the group split off to form Inane, over the years the Null absorbed many other groups to boost its own staff body and project portfolio. Groups that merged with Null include Manga-Section in late 2004, Video Games & Manga (VGM) in early 2005, and Blackout in mid 2006. Also, in early 2006, Null began sharing its website with fellow like-minded scanlator Manga-Heaven.

Null was also infamous in the scanlation community for its secrecy. During the time when the group was first founded, scanlating licensed series was often frowned upon. To avoid unnecessary attention and trouble, kal- and the other founding members decided to keep the group's whereabouts a secret, and the group adopted the motto of "this group doesn't exist." Since then, Null has requested websites not to list its IRC channel or the website URL, so users had to put in quite a bit of effort to locate Null. In 2009, the scanlation scene was a much different world than it had been seven years ago, and scanlating licensed series became commonplace. After a staff vote, Null finally shed its skin of secrecy, announcing that "Null exists!" and made its website and IRC channel more readily available to the public.

In 2009, Null is one of the few groups created in the early 2000s that is still considered fully operational, and shares its website with fellow shounen scanlator Manga-Heaven while continuing to scanlate various shounen-oriented series, including high-quality scanlation of its star project One Piece.

This is the fifth website and the second big hiatus. Null is still inactive, for now.

The XDCC bots are online and the old releases can be downloaded from Null|Archive. Some series were started and/or continued by other teams; those releases were added as well. The original Null XDCC search script has been replaced by an open source code called XDCC Parser Global.

Projects: they're all inactive except maybe Hotman IF I can find a translator to finish the last two volumes.

The former null forum has been replaced by a new, separate, and empty, phpBB forum. Back-ups and future migrations will now be possible.

Null-Classroom is now integrated into the main website. Note that the classroom's archive site was never down and can still be visited anytime. And by the way, there are no teachers available at the moment so if you send your homework you may or may not have an answer.

Wikilation is up again unfortunately the back-up database used was a bit old and many things were lost. It was also upgraded to a recent Mediawiki version but the migration didn't go so well: the formating has to be fixed. Feel free to contribute : )