Rise of the Release Trackers

By 2003, many groups that had emerged onto the scene in 2001 and 2002 had already become a part of the establishment, and by 2004 and 2005 various scanlation groups covered every manga genre imaginable. Groups had their own "signature series," and sharing of staff members was common between like-minded groups. While it is difficult to pin down exactly when the switch from the first generation to the second generation happened, the difference between the two periods can best be characterized by a shift from the community being centered around large-scale groups to the community being centered around release announcing sites, a transition that occurred sometime between late 2002 and early 2004. This period of growth transformed the scene from a community of larger, localized groups releasing an average of 15 to 20 chapters a day into, by 2006, a community of scores of groups releasing an aggregate of around 50 chapters a day.

The main cause for this shift was the robust growth of newer and smaller groups that focused on distributing a few select projects. Many of these groups were founded by scanlators that gained experience in older, larger groups then decided to branch off to release their own pet projects. One of the reasons for this influx of new groups was the spread of the Internet. Easier access to the Internet made it easier to create a website and share scanlations. The spread of broadband and other web technologies helped lower the bar for entry for scanlators.

As these new groups emerged, new websites were established, and many channels were founded on the IRC networks. This rapid growth stretched the community. The release announcing sites became the glue that bound the scattered community together by providing a way for manga fans to keep track of all the different groups and their projects. This transition was forced along by the dispersal of large manga groups among the IRC networks due to the DDoS attacks that brought down some of the major IRC networks like mIRC-X. 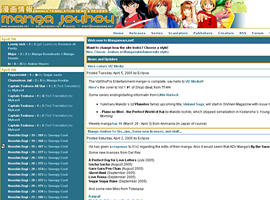 With more and more groups breaking into the scene, tracking which group scanlated what series and when a new chapter was released became increasingly difficult. Release reporting sites were created in response and soon became the center of the scanlation community. Groups reported their new releases on these sites to get better exposure for their projects and bring more visitors to their websites, and fans visited the sites daily to check for new releases of their favorite series and discover new manga.

Before 2002, people used Noated to find scanlations. But in 2002, Noated's founder Typus left the scene, taking the site with him. Others tried to recreate the site, but by the time Noated was brought back, other sites focusing purely on listing scanlation releases had already filled the void it left behind.

In 2002, a French scanlation tracking site called DailyManga launched. DailyManga, founded by Marcy, was primarily a French-based site, but had an option to switch the site's language to English. Because the site was based in France, DailyManga had no problem with reporting scanlations of series licensed in the U.S. But since the site's primary language was French, the English-speaking community never really latched onto the site outside of reporting their releases.

In January 2003, a few people lead by Deathscythe got together in Something Awful's forum to create an English-based release tracking site. The site, Manga Jouhou, was launched in early January of 2003 on mangajouhou.com as well as the well-chosen domain manganews.net. The site was first hosted by the fansub/scanlation group sADTRW but later moved to its own host. Manga Jouhou quickly hit it off with English scanlators thanks to its reliable release tracking and frequent scanlation news updates.

One of Manga Jouhou's unique aspects was its forum. The forum was one of the few places where people from different scanlation groups could come together and discuss the latest happenings in the scene. People shared techniques, groups posted recruitment ads, and freelance translators and editors offered their services. Amidst occasional conflict and drama, the forum became a scanlation marketplace, adding structure to an already established scanlation scene as the community boomed around Manga Jouhou. In mid 2004, Manga Jouhou was even mentioned on the popular tech site Slashdot.org in a manga-related article. Despite a slight speed bump along the way in the form of a forum crash in 2004, Jouhou, along with the entire scanlation community, prospered.

Manga Jouhou and DailyManga competed head-to-head during 2003 and 2004. While Manga Jouhou's policy of reporting only releases of unlicensed manga resulted in fewer listings, the policy gained the favor of older scanlation groups that had always dropped series when they were licensed. In 2003, there was also talk that Baka-Updates, a fansub release-tracking site, was planning a manga news section for its website (although Baka-Updates did not implement the section until early 2005).

There were, of course, other release aggregation services around. While not as big or popular as DailyManga or Manga Jouhou, they filled their various niches. There was Tokudane, a LiveJournal site started in 2004 that only tracked yuri and yaoi releases. At one point, someone even attempted to keep track of future projects. A list was made that would be updated to include the title and mangaka of projects that various groups were planning to work on. The motivation behind this was probably that many groups often unknowingly attempted to do the same project. A group would start a project only to discover another group had released the first chapter before they could. Of course, in time it became easier to keep track of such things thanks to search engines and groups going out of their way to list projects they planned to do. Sometimes if someone wanted to take a project a group had planned, the person would usually, but not always, e-mail and ask if it was okay.

« A Slow Shift in Power Up Entry into the Mainstream »