Entry into the Mainstream

By 2004, with the explosion of manga in the U.S. led by publishers like Tokyopop and Viz, the number of manga fans had increased drastically, further fueling the scanlation boom. Due to the continuous influx of new groups, the established scene grew muddled. Many of these new groups preyed on established groups' projects to gain fan support, and many of them struggled as they slowly grasped the basics of scanlation and the various "unwritten rules of the manga community" the older groups had long known. After 2004, it was common to see new groups with an editor seeking scanners and translators to work on popular series like the big Shounen Jump titles.

Before 2003, the amount of manga scanlated was limited because there were few scanlation groups around, and the manga they scanlated were usually very popular, well-written, or both. But after this massive increase in new groups, the amount of manga scanlated skyrocketed, and it became harder for fans to separate the truly high-quality manga from the huge pool of mediocre titles now being scanlated. While sites like Manga Jouhou provided reviews, most were limited due to a lack of manpower. Some, like Ignition-One's hanamichi, tried to create new services like Manga-Addicts, which listed and provided downloads for the latest scanlations released.

The years between 2003 and 2006 were a time of transition. The community's spirit of "scanlating to spread the love of manga" was slowly shifting to "scanlating to get free manga," which resulted in increased debates on the legality of scanlation. The focus on quality heralded by the "old guard" was challenged by speed scanlators who emphasized quantity and speed. As manga fans clamored for faster releases of their favorite manga, new groups emerged to meet the demands of the burgeoning community. Among these were groups such as We Hate Manga that sought fame by taking on projects that had thousands of established fans in the community. When Shoujo Manga Maniac (SMM), one of the first notable shoujo speedscan groups, made its debut in 2006, it sent many of the first and second generation shoujo groups into a frenzy with its speed scanlating practices. When old scanlation values clashed with newer ideals, drama and conflicts resulted, as described by MangaScreener's Stephen in an article on TCJ:

This was also the time when scanlation became more "mainstream." With Tokyopop and Viz pushing the popularity of manga, more U.S. fans became aware of the scanlation scene. Mainstream publications and websites began covering scanlation.

Changes were also happening within Manga Jouhou. The site, taking full advantage of its manganews.net domain, began reporting regular manga news. Starting in 2005, the site reported manga news from both the U.S. and Japan (using its scanlation connections, Manga Jouhou was able to quickly translate Japanese news into English). By 2006, Manga Jouhou was one of the few English sites dedicated to reporting manga news and information on the Internet. It was frequently referenced by sites like AnimeNewsNetwork and eventually began contacting U.S. publishers to obtain official press releases and review copies of their upcoming releases.

As Manga Jouhou moved toward a more mainstream audience, its release aggregation service suffered, and the site started to lose its hold on the scanlation community.

Despite the underlying issues and questionable new practices challenging the core ethics of scanlation, the period between 2003 to 2006, with help from release listing sites like Manga Jouhou and DailyManga, saw a record number of groups forming, each focusing on only a few series or a specific genre. It was a time when one could find manga from almost every imaginable genre as long as one looked hard enough, including many series which would have likely never made it outside of Japan if not for scanlation.

Some groups specialized in scanlating comics from countries besides Japan. MegKF scanlated non-Asian projects like Vampire Delight, a Polish comic, and Garou-chan, which was a Spanish comic they translated from the Polish release. At one point a Polish magazine even mentioned MegKF. The group planned to release another Polish comic, and the author even asked if MegKF was interested in doing it, but the deal never went through. The Spanish authors of Garou-chan also e-mailed MegKF with nice comments and even complained that MegKF didn't credit them in each chapter release, and that the group should have asked permission beforehand, something not commonly seen from Japanese mangaka. 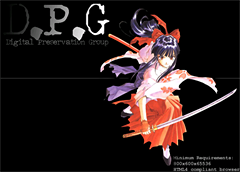 Not all groups in the community existed to scanlate manga. Digital Preservation Group (DPG) was still around and releasing artbooks and collection materials, while groups like the wiki-based Baka-Tsuki, which was formed in late 2005, provided light novel and later visual novel translations (and then there's the whole visual novel and eroge translation community).

Some groups were in contact with Japanese mangaka in one form or another, some on good terms and others not so good. When yaoi mangaka Youka Nitta came to the U.S. for Yaoicon, a yaoi convention in San Francisco, she was surprised to see people cosplaying as characters from manga she had written that were unlicensed in the United States. They had read the titles via scanlations. The yaoi group Shi-Ran at one point (before closing down) asked its readers to write letters to the mangaka Bohra Naono, whose work they scanlated, and translated several of those fan letters to Japanese with the intent to send them to Naono. A group called AtlantisDream closed down after receiving legal pressure from a German publisher they were scanning and translating a project from, so many of their staff reformed as a yaoi-only group called Countless Time.

In later years there were even instances of interaction between scanlators and U.S. distributors in which the scanlators pointed out errors in projects and attempted to improve the quality of the official releases. The best known example of this occurred when Freelance-Manga contacted Viz in their attempt "to improve the quality of Viz." As recounted in Jessica Wolf's very long letter to Viz on Rumic World's forum, Freelance-Manga listed a litany of errors as well as recommendations that would enhance the quality of Viz's releases.

I am writing this letter as a follow up to the previous correspondence I sent you on August 1st as well as a phone conversation you had with Eric Appleman from Freelance-Manga, another member of our Inuyasha community. You requested that we provide more specific examples of mistakes and areas Inuyasha fans feel that the manga and other Viz Inuyasha products can be improved. The purpose of this letter is to provide you with this information. Before writing this letter, Eric and I collected the opinions of numerous members of the community via an online forum. The opinions and suggestions in this letter are directly from the forum members; I am simply voicing their concerns to you in a cohesive manner. I hope you will be willing to consider our opinions and suggestions when publishing future Inuyasha products.

Surprisingly, Viz responded to the letter:

I just wanted to let you know that I talked to the editor of the Inuyasha profiles book and we will be correcting the errors you mentioned for our second printing. I will be doing the same for the manga. 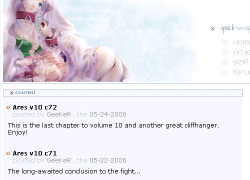 And even as Japanese manga began to gain many English speaking fans between 2003 and 2006, Korean manhwa (manga) emerged onto the scanlation scene. The first scanlator to establish a group for manhwa projects was xX_bLuE who founded the most well-known manhwa group Korean Manhwa Translations (KMTS) in early 2002. KMTS's goal was to introduce shounen and shoujo manhwa to English speaking manga fans. Among their first projects were Jjang, Audition, Change Guy, and Ragnarok (Korean). To this day, Change Guy remains the longest manhwa project to be completely scanlated. After their arrival on the scanlation scene, many of the manhwa being scanlated became just as popular as their Japanese counterparts. KMTS also helped introduce Western audiences to some of the most popular Korean authors and artists such as Im Dal Young and Park Sung Woo who are known for Unbalance x Unbalance and Zero, among others.

Other manhwa scanlation groups followed, such as HMR and Korean-Manhwa which focused mostly on shoujo manhwa. Many groups that previously focused exclusively on manga also began to scanlate manhwa. Notable among these groups were JanimeS, which scanlated Goong, Manga-Sketchbook, which scanlated Banya, and Furinkazan, which scanlated ChunRangYulJun. Some Korean authors and artists gained additional popularity when scanlation groups that focused on Japanese manga picked up the projects that these authors and artists placed in the Japanese market. One example of this crossover effect is Im Dal Young and Park Sung Woo's Black God that was originally scanlated by Null. It is worth noting that the crossover effect worked both ways; the groups that originally scanlated manhwa such as KMTS began to scanlate popular Japanese manga such as Sekirei that fit into their portfolios of existing projects.

« Rise of the Release Trackers Up The New Scene »