By 2005, order and structure were generally established in the scanlation scene, and there were extensive guides available on various aspects of scanlation, such as how to properly scan a manga and what tools and methods to use to edit scans. Some of these guides, such as p00kie's editing guide and pnyxtr's scanning guide, have been posted in many manga forums over the years and can be readily found on the internet; these guides have also contributed to the rapid growth of scanlation groups by educating newer scanlators.

Many groups had rigorous tests for hopeful translators, and in most cases there were clear "boundaries" between groups regarding which groups scanlated which series. Most groups followed a set of unspoken rules, the biggest of which was "never steal another group's work," where "stealing work" meant taking scans, translations, or anything else done by another group without permission. Failure to follow these rules often led to fights and drama. One of the more well-known instances of "scanlator drama" over a manga with a large following involved Open Sesame, which was an AnimeWaves project. In 2004, We Hate Manga, one of the more controversial "speed scanlator" groups, decided to steal the project in order to speed up the releases. In the end, AnimeWaves did speed up their release schedule to deter We Hate Manga, but the standoff spawned a number of heated debates on the amount of deference that should be granted to established groups and their projects. Most scanlators ultimately do want to be respected by their peers and will usually ask about the status of a project before picking it up from another group.

Within the shoujo scanlation community, ShoujoMagic was bigger than ever, taking on more and more projects while maintaining a consistent release schedule. The group became the shoujo counterpart to MangaProject and MangaScreener. Besides ShoujoMagic, there were many other well-established shoujo groups, many of which focused on a few select projects or mangaka. Among the projects scanlated by these groups, "smut" manga was a popular theme, although some groups like Mangasync focused on older shoujo series such as Glass Mask.

In 2003, Kaila of Da Gurlz Translationz (DGT) managed to bring six other groups together to work on a special "Christmas Bonanza" project; each group scanlated a chapter from the eight-chapter manga Zig X Zag for a joint release. Below is MegKF's news post about this collaboration:

December 25, 2003:
Kaila of DGT asked around and began a Christmas Bonanza.
From many groups we came together.
When out of the blue we began to panic!
We had nothing to do!!!
So MegKF offered and rushed to scan.
Now she had so much to do!
For Zig X Zag she had offered to share!
MegKF spoke not a word, but went straight to work,
And scanned both the volumes; then turned with a jerk,
"Now, DGT! now, ShoujoMagic! now, MegKF (of course)!
On, Shounen Chefs and Ichigo Cooks (formally SVU), on Hush! on, Eden and Endless Dimension!
To the translators! to the editors!
Now dash away! dash away! dash away all!"
The leechers were nestled all snug in their beds,
While visions of manga danced in their heads;
A bundle of chapters she had flung on her fserv's back,
And she looked like a peddler just opening her pack.
She sprang to her bed, to her teammates gave a cheer,
They had done it, it was all over but to share.
But I heard her exclaim, ere she dove out of sight,
"HAPPY CHRISTMAS TO ALL, AND TO ALL A GOOD-NIGHT!" 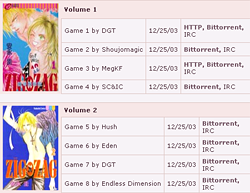 In later years when the number of scanlation groups increased, groups grew further apart, so an event like the "Christmas Bonanza" never occurred again.

The one aspect of the Christmas Bonanza that has become a very important feature of the manga scene is the overemphasis placed on holiday releases. Among the first groups to plan mass Christmas releases was SnoopyCool, and over the years, manga fans have come to expect SnoopyCool's multi-volume releases as part of the holiday season. Many other groups have followed SnoopyCool's example and planned enormous releases during the holidays, including Entropy, Dragon Voice Project, and Illuminati-Manga, among scores of other groups. On Christmas, sites like Manga Jouhou and DailyManga sometimes report over a hundred scanlation releases. Eventually the idea of special holiday releases expanded to include virtually every major holiday on the calendar, with Valentine's Day and Halloween becoming especially important to manga groups. Over the years, a great sense of anticipation as well as much in the way of advance planning hangs over these days in the community.

In this new expanded community, there were many varied groups working on many various genres of manga. There were mainstream shoujo groups like Endless Dimension, Starry Heaven, Condensation, Impossibility, and Mangasync (which worked from Indonesian versions of the manga Glass Mask). There were manhwa scanlators like Korean Manga Translations, HMR, and (later) JanimeS. There were also groups like Nakama, Bitter Sweet, and Obsession that scanlated yaoi, shounen-ai, and various kinds of doujinshi and "fringe" manga.

On the seinen manga front, MangaScreener, Omanga, and Hawks were still going strong, releasing popular projects like Monster, 20th Century Boys, Berserk, Blame!, and more. HCross's Jinmen-Juushin, Jinchi's Manga-Sketchbook, and other prominent groups formed around 2001 and 2002 were still alive and kicking as well. Some newer groups like Kotonoha collaborated with Omanga and MangaScreener, others, like Gantz scanlator ShocWave, worked exclusively on one series. There were also groups dedicated to specific mangaka or series such as the Mitsuru Adachi-only group, Adachi's Universe, and the group that only scanlated the series Salad Days, Salad Dressings.

In the shounen scene, many new groups rose up to continue work on the projects left behind by the slow demise of Toriyama's World and MangaProject while also offering new projects of their own. The "old guard" of the scene, represented by groups like SnoopyCool, was still around, scanlating popular series like Hajime no Ippo and Yakitate!! Japan. Aku Tenshi worked on DNAngel, Houshin Engi, and Whistle!, MangaDownloads worked on Rough, Major, and Rurouni Kenshin, and Ignition One worked on JoJo's Bizarre Adventure and later Hajime no Ippo. 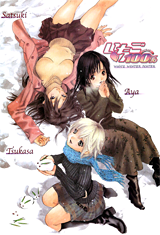 Shounen Jump series, originally scanlated by big groups like Toriyama's World, remained the scanlations most sought after by fans. After older groups dropped most Shounen Jump series when Viz started buying up the licenses, smaller "speed" groups immediately picked up where the bigger groups left off. Inane, a group that branched off from Null, scanlated Naruto. Manga-Rain and later Bleach7 (later renamed to Maximum7) dedicated themselves to Bleach. Null scanlated One Piece. Akatsuki Manga was the place to go to for Black Cat. Manga Section and, later, nexGear scanlated Hunter X Hunter. Timcanpi and Yamitsuki Anime (Yanime) first competed but later collaborated on D.Gray-man. Death Note came from We, the Fans and later TOWNL. And last but not least, Yanime and AnimeWaves competed to scanlate Ichigo 100%. The competition between the two groups was particularly fierce and can be best summarized by one of Floating_Sakura's blog posts:

The series was started by Akatsuki Manga (boings Nishio for starting it all.. ), it then eventually ended up with a joint with Yanime. With Yanime eventually doing a joint with Ass-tropes (that's was an old department of Dragon Voice Manga), and then the joint with Ass-trope eventually ended, which came to the joint between Animewaves and Yanime... and eventually our joint didn't work out after a few volumes and we had immature scanlation wars with Yanime (hehhe, good time, thinking back that is), but eventually the "war" stressed both the groups out and the "MOAR MOAR MOAR" from the ichitards didn't help either. Anyhow, props to Plumy and the rest of the Yanime team for finishing this series. Weee~ If only Viz licensed it a year or two sooner, we could all be happier people (well, beside the ichitards, they would have caused a riot!!)

Like the rivalry between Yanime and AnimeWaves, competition and drama between groups was commonplace in 2005. The "friendly" competition from years ago when everyone involved knew each other was replaced by intense rivalries between groups that rarely interacted competing for the largest audience. Most of these competitions involved shounen manga. Project poaching was also a problem; when a series scanlated by one group became popular, others would start scanlating the same series to attract more visitors. SnoopyCool inadvertently (and famously) took over several projects from other groups, leading to some interesting drama, and later became victims of project poaching themselves. When Evil-Genius first came onto the scene, the group attempted to scanlate (usually at a lower quality) a large number of popular series already being scanlated by other groups, much to the dismay of these other groups. Of course, Evil-Genius eventually dropped many of its projects and focused on only a few series, including Fullmetal Alchemist and Berserk. Another example of scanlation drama over projects is demonstrated in this log between Dragon Voice Project and Inane posted on Dragon Voice's site.

During this period, scanlation groups generally viewed their projects as their "turf," as some groups still do. As such, whenever another group started the same project, there was usually a public confrontation over IRC or via email. These turf battles are among the defining moments of the era. Since the scanlation scene was still relatively localized to IRC, with many scanlators hanging out in the same channels, the stigma attached to being labeled a "project stealer" would usually preclude groups from joint projects with more reputable groups and did seriously impact the reputations of groups among fellow scanlators.

Due to the large influx of scanlation groups, sometimes translators, editors, and other necessary staff were in short supply. It was common to see groups with imbalances in the numbers of editors and translators. Then there were cases where scanners found themselves being asked to scan manga for a group because the group had translators but no source materials to work from. It was hard to determine the optimal levels of staffing for each group, and the quality and frequency of a group's releases often suffered due to poor management. It was common during these days to see a manga dropped by a group before completion and subsequently picked up by another group due to poor management and planning.

« Entry into the Mainstream Up A Rapidly Changing Community »