It was also during this period that scanlation began its deeper descent into the legal grey area in which it finds itself today. As more groups formed, the community's old ideal of scanlation as a means to introduce lesser-known manga to U.S. fans was replaced by the cheap notion of it as a way to get free manga. Some groups formed simply to continue work on licensed series dropped by other groups. By 2005, the community was divided into two camps. The first, which included most of the new speed scanners and a handful of the older groups (like the Europe-based Manga-Sketchbook, which actually scanned U.S. releases), scanlated licensed series. The second, which included most of the older groups, did not. The release-watching sites were similarly divided. Manga Jouhou only reported unlicensed scanlations, whereas DailyManga and MangaUpdates reported both. It could be argued that DailyManga was mainly geared toward the French scanlation scene in which licenses from North American companies meant nothing, whereas MangaUpdates's mother site, Baka-Updates, was reporting licensed fansub releases back before the manga section even existed.

In one of his forum posts, SnoopyCool's founder Snoopy commented:

You just don't continue series that are licensed, it's something that you just don't do. Thus, taking on a project that has already been licensed would be an even WORSE thing to do.

As more and more groups formed, the core structure of the scanlation group began to change. In the early days, a group was usually composed of many members, working together on 10+ projects at a time. Some group leaders even resorted to using Excel spreadsheets to keep track of who was responsible for what. Sharing of staff members between groups was commonplace. As the years went on, groups grew smaller and worked on only two or three popular series. The situation was summarized in this article from TCJ by MangaScreener's head translator Stephen:

You have a few prestigious 'old guard' groups that have been active for several years, a few newer groups that have risen to prominence through lots of hard work, and numerous fringe groups that often leech off the success of a particular manga by attempting to undercut other groups and rack up quick download numbers for the win. Because many of the flash-in-the-pan groups are only concerned with the most popular manga, we (the Old Guard) have chosen to pursue series that are more culturally or artistically significant (for the most part).

And another comment on the subject from MangaScreener founder Izumi on Floating_Sakura's blog:

My main grudge with the current scene is the lack of quality manga choices and solid group work... it seems like everyone is a team of 4 or 5 people -I remember back when my team only had like 10 projects I had to use a spreadsheet just to keep track of who was doing what... and I think we've had pretty good taste over the years too.

What has happened in the last couple of years is the decline of the large group in favor of the single-project group, the licensed-group, and a huge surge of yaoi, shonen-ai, doujinshi and other *fringe* manga.

I think the best way to say it is that the community lost its focus and purity. As the tools of scanlating became more widely available and accepted more people got involved, and there was less formal structure or teamwork and more of a GOLD RUSH mentality. What we've gotten is a bunch of half-assed, low quality, smut and spam.

By the end of 2005, Manga Jouhou had mostly overtaken DailyManga as the primary release-reporting site for English scanlations. The site's reporting of general manga news helped attract many new visitors, and its manganews.net domain name put it at the top of many manga-related searches on search engines like Google.

In early 2005, Baka-Updates added a manga subsection that reported scanlation releases. The new sub-site, MangaUpdates, quickly took off and was launched under its own domain name in 2006 at mangaupdates.com. By 2006, DailyManga was losing its hold on the English-speaking community, and Manga Jouhou had shifted its focus to general manga news and reviews, so MangaUpdates slowly replaced the two former juggernauts as the premier scanlation release tracking site. 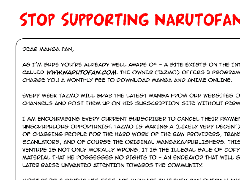 Distribution methods for scanlation were also changing. In the old days, most releases were distributed on IRC, sometimes supplemented by direct download and BitTorrent. By 2005, many manga-specific direct download sites like NarutoFan and Bleach7 rose to prominence. While these sites proved to be popular among fans that were turned off by the difficult learning curve of IRC, they also became the center of many conflicts because many charged their users to download otherwise free scanlations. Such actions outraged many groups. One of the most well-known cases of this involved NarutoFan's Tazmo, who was so infamous that some people set up a website at StopTazmo.com that offered free downloads to oppose Tazmo's charging users to download manga. People profited from scanlations through other means as well; some even sold self-burned CDs full of scanlations on Ebay.

While the days of going to a specific group's IRC channel to download manga were slowly coming to an end, IRC distribution in general was not slowing down at all. There were private distribution channels like the "Manga Illuminati" manga staff channels that were only available to people in the scene in order to provide a medium through which scanlators could share techniques while pre-empting scanlation conflicts. An IRC channel called #CKMoney also became popular for hosting bots that archived large numbers of scanlations. Around 2006, a new IRC service by Evil-Genius's VicariousLurker called Lurk began to attract attention. By going to #lurk on IRCHighway, users could download manga from several bots hosted on Lurk's servers. As Lurk's index grew, a website was set up to help index and provides easy instructions to users on how to download manga.

One unique bot on Lurk was njt's [UR]Dan, which provided manga raws (original Japanese scans). Before 2005, manga raws were very hard to find without access to Japanese peer-to-peer networks like WinMX and Winny. Many groups scanned their own manga but withheld raws from the public. [UR]Dan made #lurk one of the first places where people could find and download complete collections of various Japanese series in their "most original format." Also in 2005, njt started a small site called MangaHelpers where users could find the latest raws, translations, and scanlations of popular manga like Naruto and Bleach. In a few years, the site became one of the most popular scanlation hubs around.

« The New Scene Up And Those Who were Left Behind »