And Those Who were Left Behind

Among the general purpose scanlation sites, some, like MangaHelpers, prospered and became the foundation of the next generation of scanlators, while others weren't as fortunate.

Janice's Scanlation.com (also known as S.Com, Scanlation.dot.Com, or S.dot.Com) was a "community for scanlators and manga lovers" that came onto the scene in 2003 and tried to become the single stop for information about scanlation. The site, which reported scanlation-related news and hosted websites for scanlation groups (like MegKF), was founded by Endless Dimension's Janice in early 2004. Among the backers of S.dot.Com were a variety of influential scanlators from shoujo and shounen groups that wanted to see the site become a gathering place for established figures in the manga community.

S.dot.Com's goal was to become a public version of the Manga Illuminati channels where scanlators could interact with the scanlation-reading public. The site had message boards for scanners, proofreaders, editors, and translators. Users created guides on various aspects of scanlation, and there was a place where readers could ask questions. Some boards weren't open to the public but people could apply for access to each one. S.dot.Com was active for a while, but was too far ahead of its time; back in 2003 and 2004, groups didn't want to share their "trade secrets." By 2005 the site was mostly abandoned, and some of the original backers retreated to IRC, lending their support instead to the then-fledgling MangaUpdates.

In 2004, a site called mangamail launched which attempted to provide a service through which subscribers could receive scanlation releases via email. According to the site:

Get new manga releases in your email inbox as they come out.

You will receive zip file in the attachments. All you need to do is enter your email address and select manga titles that you want. Before subscribing, please make sure that your allowed email space is large enough to receive large attachments of up to 10Mb. Please read FAQ for more info.
Enjoy our service, its free!!! 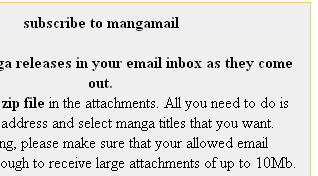 The site used Manga Jouhou to keep track of releases. Unfortunately, mangamail never managed to attract a strong user base and was mostly out of commission by 2005.

By 2007, a majority of the older scanlation groups were either struggling to keep up with the newer groups or had stopped functioning altogether. Toriyama's World and MangaProject were long gone. Groups like Dual Translations and Studio Robb were all but forgotten. Hawks and Mangasync had completely disappeared from the scene. Omanga, MangaScreener, Aku-Tenshi, AnimeWaves, and ShoujoMagic were still around, albeit operating at a much slower pace. SnoopyCool had gone through several cycles of death and rebirth, but remained productive. Among the older groups, KMTS, Null, and Solaris-SVU were especially notable for maintaining relatively robust release schedules.

One of the main characteristics of this era was the "organic growth" of the manga scene. The term "organic growth" refers to the fact that many of the newer groups of the period were formed by scanlators that had gained experience as members of the older groups. Thus, the manga scene was largely driven by people divided by only a few degrees of separation. These newer groups would then give rise to successor groups as their experienced members eventually went on to form their own groups. More often than not, the successor groups attempted to attain the same scale of production as the original groups, which resulted in the stable growth cycle in the manga scene that dominated from 2003 to 2007.

This "hierarchical" model gradually changed after 2007 as older and bigger groups slowly died off when their members retired from the scanlation scene. It is worth remembering that most scanlators started scanlating around the ages of 18 and 20 while attending college. Due to real life issues mostly caused by aging, many older scanlators who were active from 2000 to 2004 began to retire without having established successors. In response, many of the newer scanlators formed smaller groups that focused on fewer projects. These new arrivals focused largely on speed scanlating shounen titles. They placed their focus on releasing chapters of a manga every week within hours of the Japanese release. And as more and more titles were licensed in the U.S., a larger percentage of the titles being scanlated were licensed titles. This new generation of small, fast scanlation groups, with their releases archived by MangaUpdates, MangaHelpers, and various download and online reading sites, marked the beginning of a new era of scanlation.