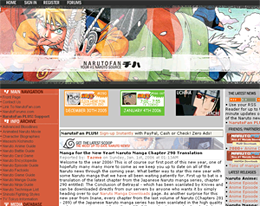 The world of scanlation is full of drama, from the big groups in 2001 to the small speed scanlators of 2009; time change, but human nature does not. Countless drama and conflicts have happened between different scanlation groups, download sites, fan communities and what have you, some more interesting than others. While a majority of these conflicts were a direct result of breaking the "unwritten code" of scanlation such as project poaching or improper attribution of credits, some were simply caused by some silly mistakes.

One time, Toriyama's World was experimenting with fansubs, in particular, Naruto fansubs. When Toriyama's World hosted the first episode of Naruto that they fansubbed, everyone visiting their site downloaded it, and the server went down. All was good, except for the fact that almost every other group at the time (Omanga, SnoopyCool, The Juppon Gatana, Aku Tenshi, and many, many others) were hosted on the same shared host (ChamberGates, a popular shared host among early scanlators), as a result everyone suffered the same consequence. Some groups put a graphic on their main page showing Toriyama's World as a kid with a dunce cap sitting in the corner saying he was an idiot for web hosting a popular fansub. Of course, that was a time when the community was small and many groups, including Toriyama's World, had shared staff, so the graphics were soon taken down. At the time, ChamberGates offered nearly unlimited hosting, and many groups used it to host their manga (for example, groups like MangaProject and SnoopyCool also hosted a large number of files on ChamberGates as well, so everyone was in one way or another responsible). It was a matter of time before ChamberGates changed its policies due to the huge amount of manga hosted on its servers, and the fansub download was just one of the last straws. Soon afterwards Toriyama's World began hosting fansubs, ChamberGates implemented new hosting policies, resulting in most groups leaving ChamberGates for hosts.

Another common cause of drama was project poaching. Sometimes when a group's project became popular or inactive, others groups would try to scanlate the same series in order to attract more visitors or to continue the stalled scanlation. SnoopyCool inadvertently (and famously) took over several projects like Flame of Recca from other groups, leading to some interesting drama, and later became victims of project poaching themselves. When Evil-Genius first came into the scene, the group attempted to scanlate a large number of popular series already being scanlated by other groups (usually at a lower quality), much to the dismay of other groups. Of course, eventually Evil-Genius dropped many of its projects and focused on only a few series, including Fullmetal Alchemist and Berserk.

An example of scanlation drama over a project from 2005 is demonstrated in this log between DragonVoice and Inane posted at DragonVoice's site:

As can be seen from the above conversation, scanlation groups often viewed their projects as their "turf." As such, whenever a group would start the same project, there was usually a public confrontation over the project on IRC or via email. In 2005, the scanlation scene was still relatively localized to IRC with many scanlators hanging out in the same channels. As implied by riseabove77, the stigma attached to being labeled a "project stealer" would usually preclude groups from joint projects with more reputable groups and did impact the reputations of groups among scanlators.

More recent incidents include a 2008 clash between MangaShare/Binktopia and BleachExile on credit page removal, as well as an incident between Binktopia and SleepyFans regarding Binktopia's raw provider Manyou, which played a part in Binktopia ultimately dropping Naruto.

To this day, one of the most interesting drama stories involve a coalition of groups and download sites versus NarutoFan and its owner Tazmo.

So what's this Tazmo deal all about? NarutoFan, being one of the biggest English Naruto communities around, also provides direct download of Naruto manga and anime (and later other series as well). While users are able to download most contents for free, NarutoFan offers an account upgrade that comes with better service. The catch, users have to pay a monthly fee for the upgrade. Now this is where things get messy. Many from the scanlation scene, especially those that produces Naruto scanlation, do not like the idea of other people making users pay to download their work, especially when the same content can be obtained for free via BitTorrent, IRC and other download services.

In 2004, the dissatisfaction with Tazmo and NarutoFan cumulated in the creation of StopTazmo.com, an anti-Tazmo forum site that offers direct manga downloads for free (although the owners of StopTazmo runs National Anime as well). StopTazmo created many posts with information on the "evil nature" of Tazmo, and even made a special "Bash Tazmo" board where users go to express their anger against Tazmo. 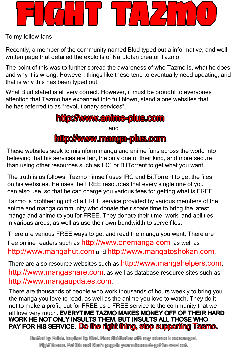 Of course, there are those who support Tazmo as well, particularly people from within the NarutoFan community. Arguments against the anti-Tazmo propaganda pointed out that a significant amount of money is needed to run a large download network like NarutoFan. Others pointed out that many people do not have the means or skills to download manga or anime via BitTorrent and IRC, so a fast direct download service like NarutoFan provided an alternative mean for them to get their manga.

The campaign against Tazmo has also influenced the development of the scanlation community. Around 2005, groups like Bleach7 and Inane complained that NarutoFan does not credit their group when hosting their scanlation. Some groups posted anti-Tazmo messages and information on their websites while others resorted to the more extreme measure of including anti-Tazmo messages in their releases. Inane, the main scanlator of Naruto back in 2005, was one of those groups. A direct result of Inane's action was the creation of Shannaro, a Naruto scanlation group created by NarutoFan's community in retaliation to Inane's actions. Since then, the number of Naruto scanlators increased drastically. This event helped trigger the speedscan movement. By mid 2007, there were thirteen different groups, including one-man teams, scanlating Naruto.

As years went by, many older anti-Tazmo groups disbanded, and tension between NarutoFan and sites like StopTazmo began to die down as the sites went their separate way. Throughout the years Tazmo opened many other manga and anime download services such as Bleach World, mangaPLUS and animePLUS, most of which followed the same payment model of NarutoFan. As older anti-Tazmo groups disappeared, new ones appeared. By 2009, many groups still actively ran campaigns against Tazmo, receiving support from major scanlation sites like MangaUpdates and MangaShare. Of course, there are those who do not care about the whole ordeal. Nonetheless, the "Tazmo Crusade" is an interesting case study on scanlation drama and conflicts for both those within the community and outsiders.