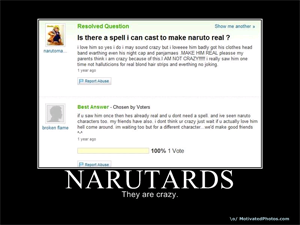 Naruto is a special series in the world of scanlation. The manga has been scanlated since the beginning of modern scanlation, and 10 years later it is still being scanlated. Naruto is so popular that at one point, around 2008, there were over half a dozen groups scanlating it.

With its larger audience came more die-hard fans. Naruto, being the most popular scanlated series, had the largest number of fanboys, eventually dubbed "Narutards" because of their feverish fanaticism and their rabid defense of the manga against any negative criticism. Of course, fanboys of other series have been given their own derogatory names, but Naruto scanlation and the Narutards stand out because they are perfect examples of various trends in the scanlation scene post-2005.

With popularity comes drama. Naruto scanlators were some of the first speed scanlators, and these speed scanlators were often in conflict with the bigger and older groups. While the older groups saw these younger groups as disrespectful and ignorant of proper scanlation practices, the younger groups saw the older groups as arrogant and old-fashioned. In addition to this generational conflict, there was a huge ordeal in the community based around the site NarutoFan. NarutoFan was one of the biggest English-language Naruto communities on the Internet, but they charged readers to download scanlations that were otherwise free. This didn't sit well with the scanlators.

The first team to scanlate Naruto was MangaScreener, one of the oldest scanlation groups around. But not long after, Toriyama's World came along and started scanlating Naruto as well; they quickly became the number one Naruto scanlator in the scene. Thanks to the popular Shounen Jump series like Naruto and Hikaru no Go that it scanlated, Toriyama's World became one of the biggest and most influential scanlators of its day.

After Viz licensed the manga in mid-2002, Toriyama's World dropped the project. Many fans complained, and some of the more industrious ones, with help from Manga-Daisuki, Manga-Sketchbook, and MangaProject, created a new group called Null to continue the scanlation. Shortly after its founding, Null began to focus on One Piece scanlation, and the part of the group in charge of scanlating Naruto split and joined another group of scanlators to form a new group. The new group formed by this joint was named Inane, and, until 2005, Inane became the dominant group everyone looked to for their weekly Naruto fix. At the time, other groups, like Orange Tangerine, also scanlated Naruto; but without the same level of success as Inane.

Around this time, NarutoFan was already one of the largest English Naruto communities on the Internet, and when new Naruto chapters were released, the NarutoFan forums bustled with people discussing spoilers, downloading Japanese raws, and later reading Inane's scanlations. In mid-2005, tensions flared between NarutoFan and the scanlation community because of the site's dubious activities, finally ending in Inane watermarking anti-NarutoFan messages onto their weekly Naruto releases. In retaliation, NarutoFan's community formed their own Naruto scanlation team called Shannaro. In the coming months, Inane and Shannaro competed head-to-head scanlating Naruto, and each of their releases were meticulously compared by fans, who sometimes went so far as to compare the way shading was edited in a character's eye.

The dispute between Inane and NarutoFan and the subsequent creation of Shannaro put an end to the trend of one major group scanlating Naruto exclusively. By the end of 2005, there were more than five groups releasing weekly Naruto scanlations: Zarosaki, Ice-Master Scanlations, absolute gravity, and AE Manga, just to name a few. By the beginning of 2006, Inane and Shannaro were both struggling to maintain their dominance, while new groups like Japflap (which later worked on Naruto with Shannaro as a joint project), Jinchuuriki, and Illuminati-Manga became the "preferred groups."

Throughout the years, this multi-group approach to Naruto resulted in smaller groups and faster scanlation, as many groups tried to get their releases out before the competition with no regard for the quality of their work. By 2009, some of the major Naruto groups included Binktopia, Franky House, SleepyFans, Hueco Mundo, and Japflap.

Below is a list of scanlators that have worked on Naruto (as of 2009 summer) according to data collected from MangaUpdates and DailyManga: