Changing of the Guard

By 2006, licensed scanlations were commonplace, partly due to the large increase in licenses acquired by U.S. publishers. With such large-scale rejection of the old code against scanlating licensed series, the purpose of scanlation also shifted from "introducing people to obscure manga" to "scanlating to read licensed and unlicensed manga for free." By 2008, scanlation was mostly associated with getting free manga online. Lead by Shounen Jump series like Naruto and Bleach, shounen manga dominated most of the scanlation scene while shoujo and other less popular genres had much smaller spheres of influences.

Around this time most second generation scanlation groups had either disbanded or became inactive. In 2007, Inuyasha - Sengoku o-Togi Zoushi, a translation site that had been providing scripts of Inuyasha since 1997, finally went offline after ceasing operations in 2006, making it one of the longest-lived Internet translation efforts. At the same time, most of the old guard scanlators had reached their late 20s and 30s and no longer had the time to put a sustained effort into scanlation projects. By 2008, big groups like MangaScreener, Aku Tenshi, and Omanga were mostly inactive or on hiatus, while other older groups like ShoujoMagic, SnoopyCool, AnimeWaves, Solaris-SVU, and Null, among others, maintained relatively robust release schedules, albeit on a much slower pace than before. Many of the projects dropped by disbanded second generation groups were picked up by newer and smaller groups. 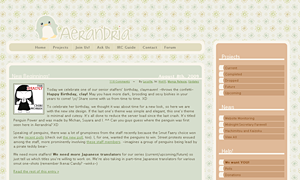 In the shoujo community, ShoujoMagic, having become bloated with a huge portfolio of projects, lost many of its staff members due to most of its older members moving on with their lives, and the group came close to shutting down in 2009. Although its cry for help was answered by new applicants, the group lost its dominance in the scene, and was finally shut down in September. Other established groups like MangaArt, Dragon Voice Project, Da Gurlz Translationz, MegKF, and Ivyscan were still around, but had lost some steam over the years. Meanwhile, new groups like Aerandria and Antebellum Scanlations that were formed in the late-2000s began to attract attention. By 2009, Aerandria was the biggest shoujo scanlator in the scene, with many comparing it to ShoujoMagic in their early days.

The yaoi scanlation community also lost many of its old groups, including DokiDoki, Forever More, and Hochuuami. Older groups like Lililicious and Obsession were still around, and the LiveJournal-based yaoi scanlation release tracking site Tokudane was still around and fully operational. Like Tokudane, many other shoujo and yaoi scanlators used social networking sites like LiveJournal and WordPress.com to host their groups' websites.

Additonally, the shoujo groups chose a third form of development in their vast retreat to forums. Many shoujo and yaoi groups now focus exclusively on their own forums and require fans to sign up and post in order to be able to download their manga, which is a reversion to an older model and may be the big trend driving the evolution of shoujo groups in the future.

Some of the older and more established groups were still around, and some of them, like SnoopyCool, Null, Solaris-SVU, Storm in Heaven, Be With You Scans, Entropy, and Illuminati-Manga, remained quite active.

Most of the Shounen Jump-focused groups released on direct download sites and worked through a more open form of the scanlation process represented by MangaHelpers and have largely been the focus of the third generation. However, it is worth noting that there are groups trying to maintain the old style of scanlation groups with a focus on other shounen and seinen manga. These groups have largely remained on IRC and interacted with members from groups from the earlier generations.

Among the leaders of the newer generation of groups (formed in the mid and late 2000s) are DFCG, Dynasty Scans, Hells Castle, NCIS, SCX-Scanlations, Viscans, and KMTS's successor A-Team. These groups represent a newer breed of IRC-based groups. They generally maintain a robust presence on the Internet through MangaHelpers and their own blogs and websites and form the backbone of the IRC-based manga scene.

These groups have maintained the exact opposite focus of the Shounen Jump manga groups, and their position in the scene is best seen as the successor to the old guard of the first two generations. They emphasize quality as well as manga overlooked by the Shounen Jump groups looking for the "next big thing." The structure and practices of these groups often resemble those of older groups like MangaProject and Toriyama's World. Despite these groups' focus on quality, they often maintain friendly relations with most speed scanlators as well as online reading and download sites.

In 2008, Manga Jouhou and DailyManga have mostly lost their relevance in the community, replaced by large hub sites such as MangaUpdates and MangaHelpers, both of which began branching out to include other services in order to attract more users and stay up-to-date in the ever-changing world of scanlation.

« The "Raw" and "Speed" Movement Up Online Reading and Direct Downloads »