By 1998, the Internet was bustling with manga translations and primitive scanlations made with MS Paint. Thanks to free hosting services like GeoCities and Angelfire, translators and scanlators created websites to host manga scripts and scans. Simple link directories and webrings were set up to organize the large number of translations available online.

Around this time, some people got together and created an IRC channel called #mangascans on the EFnet server (the oldest and one of the largest IRC networks). The new channel was used by people sharing the same interest to discuss and exchanged manga and soon became a popular gathering place for translators and scanlators. Sometime between 1999 and 2000, #mangascans was moved to DALnet. By 2000, organized scanlation groups began to emerge from #mangascans.

The first modern scanlation group, Mangascans, was formed by darkshard in April 2000 at mangascans.cjb.net. According to the History section on Mangascans's site:

Started around April 2000. This site was the founder and first of manga fansub group on the internet. Its [sic] been many years before this time, that I've always wondered why there were so many anime fansub groups but no manga fansub groups around, which was why I decided to set one up. We are the first manga group that started a manga series and completely finish [sic] the series. Starting with I''s, DNA^2, then finally Love Hina. Quality wasn't really a priority back then. In fact, the I''s Manga project finished in just 2 months. From MANGASCANS ashes many such fansub groups have grown. Most, now using our favourite manga editing font, wildword.

darkshard gathered and coordinated translators, scanners, and editors to work together on projects. In no time, Mangascans grew to a 30-person group. There were other major one-man projects at the time such as Studio Robb and Ryokurin (which eventually evolved into MangaScreener), but Mangascans was the first of its kind to fully scanlate an entire manga. The projects Mangascans worked on, I''s, DNA^2, and Love Hina, were distributed on isscans.cjb.net, dna2scans.cjb.net, and lhscans.cjb.net respectively.

Mangascans watermarked and put random messages on its scanlations directing people to its website, and the website itself contained information about the group's IRC channel #mangascans hosted on DALnet. Many people, after reading Mangascans's releases, found their way to the website and then the IRC channel. One of those people was ZlleH. At first, ZlleH simply lurked in #mangascans, but he soon got involved in the group as an editor. He would eventually go on to help darkshard run Mangascans.

By mid 2000, many were calling the group "MangaProject." The #mangascans channel became a 20 to 30 person channel where people could download and discuss scanlations. At the time, most other scanlation groups and individuals had websites but not IRC channels, so people from other projects also came to #mangascans to distribute their own work. As the IRC channel's user base grew, conversation on projects began interfering with general manga discussions, so ZlleH created a new IRC channel called #MangaProject around August 2001, making #mangascans for talking about the scans and #MangaProject for organizing the projects.

By late 2000, groups similar to Mangascans began to emerge. Among these was MangaScreener, a manga fanscan section in the e-zine Ryokurin that slowly transformed into its own scanlation group. According to its founder Izumi (a.k.a. iansmith), MangaScreener is the second oldest scanlation group to be formed. In the beginning, MangaScreener focused on shounen titles and for a time even made its releases available via HTML to be read in a browser as a slideshow. SnoopyCool was another group created in early 2000. At first, SnoopyCool was just a regular fan site run by Snoopy that offered anime downloads, but was turned into a scanlation group in 2001. There were also many strong one-man scanlation groups, including Robb's Studio Robb, FuguTabetai's MangaTranslation, and rp's Suou Jima (later renamed to Random Manga Translations). 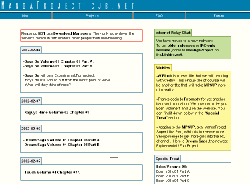 In 2001, Mangascans finished scanlating all available volumes of Love Hina, and the group disbanded soon afterward. ZlleH and Ichijo went on to form MangaProject along with most of Mangascans's staff, darkshard included. The official website of MangaProject was located at mangaprojects.com and mangaproject.cjb.net (CJB.net was used for free redirect). At the time, Love Hina was still being serialized and was only up to around volume 8 in Japan. After Mangascans disbanded, a new group formed by darkshard's friend GenmaC called Dual Translations picked up Love Hina where Mangascans left off.

MangaProject's main goal was to release high-quality scanlation. Although the group was initially led by both ZlleH and Ichijo, Ichijo soon left MangaProject. One of the main reasons MangaProject was created was in response to the low-quality releases of manga scanlations at the time. For example, the first manga Mangascans scanned and edited, I''s, was released with many spelling mistakes in the script. As MangaProject grew, focus was placed on high-quality scans. Different editors were expected to edit the same way so the editing was consistent, and instead of using scans from the Internet uploaded by Japanese people, MangaProject bought and scanned manga themselves.

MangaProject's IRC channel grew, and volunteers increased. In no time, MangaProject was the largest English scanlation group on the Internet, boasting the best quality of scanlation with the most consistent rate of releases. At its height, #MangaProject grew to around 1,000 users, and had an average of 700 users, an unusually high number for an IRC channel at the time that was rivaled only by #ShoujoMagic a few years later. Some groups, like shoujo scanlator MangaArt, even made their releases available through #MangaProject to reach a bigger audience.

The quality of MangaProject's releases was so good for its time that many worried it would discourage people from buying the actual manga. There were other one-man shows that released high-quality manga, but most were done for the love of art and only released once every few months. As MangaProject grew older, many staff member left the team to form their own groups, while younger groups like ShoujoMagic looked to MangaProject for guidance on how to scanlate manga.

« The Land Before Time Up Growth and Establishment of the Scene »