By 2002, numerous new scanlation groups were created as members from the first wave of scanlation groups began forming their own groups. Isolated efforts of translation and scanlation were replaced by a close-knit community of scanlaton groups; a true scanlation scene was born. MangaProject was still the most respected and one of the biggest scanlation groups in the scene, but a few other groups were also able to set themselves apart from the rest of the community. These groups included MangaScreener, Toriyama's World, Dual Translations, and newer groups like ShoujoMagic, Project Omanga, and SnoopyCool.

Around this time, many scanlation groups had their own IRC channels. IRC became one of the community's primary methods for communication and distributing their scanlations. IRC played a huge role in the early development of scanlation; many groups, including MangaProject, MangaScreener, and ShoujoMagic all came directly out of #mangascans on DALnet.

MangaScreener, founded by Izumi (Ian Smith), scanlated shounen manga like Shaman King and Naruto (MangaScreener was the first group to scanlate Naruto) until Toriyama's World showed up in early 2001 and gave MangaScreener some competition. After that point, MangaScreener started shifting its focus away from shounen manga toward "series that are more culturally or artistically significant (for the most part)" and banded with like-minded groups such as Omanga and Hawks. It was also around this time that Izumi handed leadership of Mangascreener over to flyingrobot (Stephen Paul), one of the most well-known and well-respected translators in the scanlation community. However, Izumi stayed around to help the group on a regular basis long after his retirement.

Dual Translations, which scanlated the popular manga Love Hina after Mangascans disbanded, was still around and offered another source of high-quality scanlation. The group helped introduce many new manga fans to scanlation through Love Hina. Although Dual Translations more or less ceased operation in late 2002 and disbanded a few years later, it was able to finish its high-quality release of Devil & Devil before disbanding. After Dual Translations ceased operation, one of its members, Starakin, went on to create a manga hosting site called Love Hina Party.

Toriyama's World, formed in March 2001 by AK of Troy and Gotenks243 (Mike), focused mostly on scanlating shounen manga serialized in Shueisha's Weekly Shounen Jump, including the all-time popular Naruto, Hikaru no Go, Hunter X Hunter, and many more. At the time, groups did not speedscan the latest chapters of, say, Naruto or Bleach from magazine scans every week before the chapters even hit Japanese newsstands. Instead, the common practice was to scan from compiled volumes, also known as tankoubon. Sometimes Toriyama's World even translated from French to English. Thanks to the popularity of its projects, Toriyama's World soon became one of the biggest and most influential groups of its day, making it the only group able to match MangaProject in size and influence. Unlike MangaProject, Toriyama's World also became well-known outside the scanlation scene, and was often mentioned by mainstream publications in scanlation-related articles. In 2007, long after Toriyama's World had lost its dominance, Wired Magazine ran a special manga-form article in its November 2007 issue, featuring appearances by manga industry figures, one of which was Toriyama's World's AK of Troy. 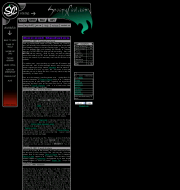 Between 2001 and 2002, older manga translation projects and one-person efforts by the likes of Spamdini were mostly out of commission, making way for more organized group efforts. Many of those behind such operations formed their own groups or joined existing ones (for example, Ndrizzt worked on Hunter X Hunter well before joining Toriyama's World). This period saw the birth of many new powerhouse groups like Omanga, SnoopyCool, Manga-Daisuki, ShoujoMagic, and Manga-Sketchbook. Some of these groups, following in the footsteps of bigger groups like MangaProject and MangaScreener, would later become prominent players in the scanlation scene.

By 2002, the scanlation landscape was basically divided into four spheres of influences. Toriyama's World and MangaProject each had their own fanbase. Toriyama's World, along with others like Dual Translations, belonged to a group of scanlators that scanlated popular shounen manga like Naruto and Love Hina. MangaProject, which worked on ARMS, Trigun, and other shounen (and some shoujo) manga, was part of a group of scanlators that worked on less popular but more interesting (and often higher-quality) series. MangaScreener, likewise, was transitioning from a shounen-oriented group into one that scanlated less well-known series. Project Omanga and Band of the Hawks both scanlated manga aimed at more mature audiences and were known for their quality (if there was ever a group that truly deserved to be called high quality, it was Hawks for its scanlation of Berserk). There was also SnoopyCool, scanlating shounen manga like Flame of Recca, Hajime no Ippo, and Psychic Academy. Most groups in these two categories scanlated shounen, seinen, and generally male-oriented manga.

Other notable shounen and shoujo groups of the period included MangaArt (which later spawned Solaris-SVU), and Storm in Heaven. Some groups at the time had their own "signature projects," including Aku Tenshi, which worked on D.N.Angel and Whistle!, Z Anime, which worked on Ghost in the Shell, Seraphic Feather, and Neon Genesis Evangelion, Tsuzuku Jinsei O..., which worked on Orifina and Edens Bowy, and Mangasync, which worked on Glass Mask.

Also around were alternative scanlators such as JanimeS (which was formed in late 2001 from anime-anime.com) that scanlated manga and later Korean manhwa. Another notable group was the Digital Preservation Group, or DPG, a team formed in 2001 that focused on scanning art books.

Studio Robb, Robb's one-person group, was still around and going strong. Studio Robb was one of the few one-person groups at the time with a following that could match up to that of normal groups. Robb had an interesting section on his site in which he translated fan comments and sent them to the author of one of the more popular manga that he translated. Studio Robb continued scanlating until 2004, when Robb finally made it into the manga industry and found a job at Studio Ironcat. Another one-person group was rp's Random Manga Translations (originally called "Suou Jima" after an island in Pocket Monsters Special, also known as Pokemon Adventure), which was founded in November of 2000 and scanlated series like Detective Conan and Hellsing (RMT picked up Hellsing after ^Vulpix^ closed down Crunchy Cheese). RMT closed its doors in April of 2006 when rp felt it was time to end the group. Other notable individual efforts included Salad Dressings, which scanlated Salad Days, Shalone7, which scanlated Eat-Man and Hotman, and Certhy, an early shoujo scanlator that eventually joined MangaProject.

An interesting experiment in scanlation was conducted by MangaTranslation's FuguTabetai, who created a program called GMAO (Great Manga Application Onidzuka) to help with the scanlation process. FuguTabetai ran an open source Great Teacher Onizuka translation project where Japanese pages of GTO were hosted and people could fill in the bubbles using the aforementioned program. The same software was later used for MangaTranslation's scanlation of Tenjou Tenge. MangaTranslation was also one of the first groups to use BitTorrent to distribute manga when the technology was first released.

Numerous groups working on shoujo scanlations formed the third circle of influence. Leading them was Siana's ShoujoMagic, one of the most popular shoujo scanlators ever. ShoujoMagic was formed in 2002, relatively late compared to other major groups. But thanks to Siana's exceptional organization and management skills, ShoujoMagic was able to take on a large number of projects while maintaining a consistent release schedule. At its peak, the group had around eighty staff members working on over seventy projects with over fifty new projects planned. Despite this enormous workload, the group still managed to release manga on a daily basis. The group's IRC channel, #ShoujoMagic, had over 900 users and was one of the two major scanlation hubs on DALnet (the other being #MangaProject).

Some groups focused on specific artists or styles. Sakura-Crisis, a two-person team that scanlated darker shoujo manga like Kaori Yuuki's Count Cain. Sakura-Crisis gradually expanded throughout the years, but stopped releasing in the early 2000s. The group was practically out of commission by 2005 (although they came back to life briefly in 2007). Other notable shoujo groups included MangaArt (one of the first shoujo scanlation groups) and Endless Dimension. As with the shounen groups, these shoujo groups also saw crossover and sharing of staff members.

The final circle of influence was composed of groups like the Europe-based Manga-Sketchbook which, besides scanlating, scanned manga released by U.S. publishers like Viz and Dark Horse. These groups weren't as popular with the rest of the scanlation community because they scanned licensed work—a practice looked down upon by the rest of the community. However, Manga-Sketchbook was not the only controversial group; for example, although MangaProject always dropped licensed series, an "underground" group calling itself The Furry Triangles, or TFT, popped up in 2002 and began distributing scanlations of licensed series and scanlations that might cause problems among groups in #MangaProject. TFT was very elusive and only appeared on IRC; there were also rumors that it was run by staff from MangaProject.

Though many in the community looked down on their practices, people downloaded these controversial groups' work, and the groups continued to thrive. Although in the very beginning the scanlation community enjoyed a relatively good relationship with the manga industry, it wasn't long before it found itself in a more legally grey area.